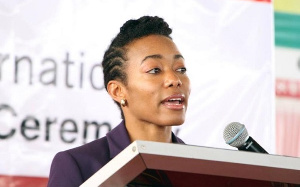 The Member of Parliament for the Klottey–Korle Constituency in the Greater Accra Region, Zanetor Agyemang-Rawlings has said that the relevance of the June 4th uprising on the fourth republic dispensation is quite clear and cannot be discounted in any way.

She made this remark when she took her turn as the first speaker to address members of the London South Branch of the NDC when they celebrated the 42nd Anniversary on the theme; “The Impact of The June 4th On The Fourth Republic of Ghana”.

Zanetor said the principles of June 4th are still a mirror to guide the country as we move forward and that people who are quick to dismiss the impact of the revolution on the Fourth Republic dispensation are just being hypocritical. She further made the assertion that there is some sense of impunity that people can break the law based on their political inclination which the principles of June 4th stood against.

A founding member of the National Democratic Congress (NDC), Goosie Tanoh also traced the antecedent of the political history of Ghana since the Nkrumah days at the time when politicians were fighting for political legitimacy. He praised the extraordinary courage of Former President Rawlings, who emerged as the leader of the revolution at a time when the country was in dire need of leadership to deal with the mess that has been created by the military.

He further stated that the military government at the time had created a very oppressive and corrupt system that affected the economic lives of the ordinary Ghanaian. There was a massive shortage of necessities across the country and no foreign exchange for business transactions. There was also a massive brain drain which affected the capacity of the economy to develop.

He further noted that by the time Rawlings captured power, there was so much tension in the country as a result of the corruption and the oppressive nature of the regime. Almost all state institutions in the country had collapsed including the judiciary which was seen as very partisan in their adjudication of cases.

He posited that the country is now grappling with the same issues that preceded June 4th with general economic hardship rife in the country and a sense of impunity and lack of regard for the law. He said the nature of politics is grounded in the economic life of the ordinary Ghanaian and that is what politicians should pay attention to.

“The relevance of the June 4th cannot be discounted as it transited to the PNDC era which laid the foundation for the 4th Republic that we currently enjoy,” he stressed.