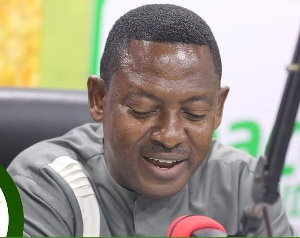 Former Member of Parliament for Upper Denkyira West constituency, Ben Aryeh has urged the leadership of the New Patriotic Party (NPP) to crack the whip no matter their status.

He was reacting to debate surrounding NPP's 2024 candidates, some comments reportedly made by Majority leader, Osei Kyei Mensah Bonsu, as well as an indication from party leadership that they will call such people to order.

The General Secretary of the New Patriotic Party (NPP), Mr John Boadu says “the party’s National Executive Committee (NEC) is scheduled to meet very soon to deliberate on developments regarding the 2024 flag-bearer contest, and will, most definitely, take a strong position on the matter in order to ensure that every member of the party, regardless of their status, is called to order. The party is much bigger than the individual ambitions of its leading members”

Speaking on Peace FM's Morning show 'Kokrokoo', Ben Aryeh urged the executives not to "be biased but whip everybody inline" no matter their status.

"They should exhibit real leadership; it doesn't matter the weight of the person...but if there's any form of bias, it won't be appropriate" he added.

Listen to him in the video below:

President meets families of May 9 disaster