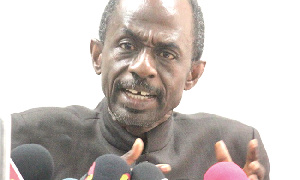 The General Secretary of the opposition National Democratic Congress, Johnson Asiedu Nketia says the current government instead of improving on the gains made in the power sector by the previous Mahama administration is rather reversing it.

According to him, the Mahama administration fully resolved the issues of power generation and financial challenges that had brought about the power crisis during the NDC’s tenure in office.

“This dumsor, we saw it coming so we went there with our eyes open. John Mahama promised to fix it and make sure we don’t get back there again. Concrete measures were put in place to ensure the realization of that vision. Unfortunately, Nana Addo came and decided to destroy all that and reversed all the gains in the power sector,” Mr. Aseidu Nketia alleged on Accra-Based Class Fm.

Some parts of Ghana are currently experiencing power outages which question whether the nation has returned back to the days of Dumsor.

However, the Minister for Energy, Matthew Opoku-Prempeh has dismissed that assertion and called for calm among Ghanaians insisting the power outages are as a result of technical challenges with the transmission lines.

But the NDC’s General Secretary said: “we kept warning that we are heading towards a bigger power crisis and nobody was listening.

He continued: “Before we went into the 2016 Elections, the measures we have put in place were yielding results, and indeed the ‘dumsor’ as we know it has been solved. But people wanted to believe Vice President Bawumia who kept repeating the lies and even when himself admit that ‘dumsor’ has been solved but NDC cannot take credit for it.”

Aseidu Nketia stated that the governing New Patriotic Party (NPP) after winning the 2016 election kept preaching that they have solved the power crisis that had bedeviled the Mahama administration, adding that “for me taking credit is not the problem but reversing the gains back, even beyond where we started from, is my worry.”

“So we needed to take very bold measures and the fact that there is a huge discrepancy between revenues that come in vis-à-vis the cost. Anytime you have the cost against revenue somebody must pay the difference, so it is either you have to push the revenue against the cost, or you must find a way of filling that gap,” the NDC’s firebrand stated.

The General Secretary further said that the NDC’s administration has to spend time at Cabinet meetings when in office trying to figure out how to manage the situation with respect to tariffs for consumers and factories among others.

“So there was the need to factor in other taxes that will help us to clear the Legacy Debt in the power sector, which informed us to establish the Energy Sector Levy.

“When they (NPP) took over, if they had maintained the tariffs at that level, we wouldn’t be in this mess. Because by the time they took over, the system had gradually adjusted the new tariff that has virtually close the gap between expenditure and revenue short-falls,” he stressed.

Cease the media war, use right quarters to challenge your dismissal - A/R minister to Opare-Addo

Austria lifts quarantine requirement for visitors from some countries