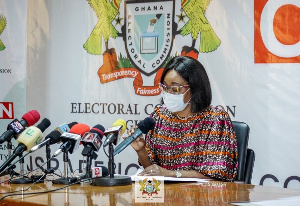 Kwesi Pratt Jnr, the Managing Editor of the Insight Newspaper, is alleging that a joint police and military team is guarding the residence of Jean Mensa, the Chairperson of the Electoral Commission (EC).

According to him, security operatives are using armoured vehicles to protect her.

“Last week I was coming home from town, late at night, there were barricades around her house; you can’t drive in front of her house without being thoroughly searched and so on. What is it that has highlighted the security level of the Chairperson of the Electoral Commission?” he asked on the Alhaji and Alhaji show on Pan African TV broadcast on Sunday.

Pratt also stated that he has never witnessed such protection for any Chairperson of the Electoral Commission before, and stressed that “something is happening”.

He further cautioned the Security authorities: “And today, I’m sending a very very clear warning to the security services. What happened at Ayawaso West Wuogon will never be allowed to happen again. In Ayawaso West Wuogon, after firing a few shots, injuring a few people and so on, people started scattering. The NDC even went to the extent of pulling out of the elections. I think that is history but I’m seeing things happening,” he said.

Pratt further added that he had seen videos of civilians confronting 30 to 40 policemen armed to the teeth and disarming them.

“The Ghanaian population is no longer afraid of guns and bullets. What I am seeing convinces me that the people of Ghana are determined to ensure that nobody bullies them. The people of Ghana have come to the point where they realize that mass mobilization is an antidote to vigilantism,[…] reckless abuse of soldiers and policemen to the achievement of narrow partisan interests,” unhappy Kwesi Pratt indicated.

He warned further that anybody who tries that on December 7 will regret it.

“The use of violence and intimidation is not going to work on December 7, it will not work. We will not allow that to work. If at the end of the elections, the people of Ghana genuinely and truly want Nana Addo Dankwa Akufo-Addo to continue in office, all of us will agree. The ballot will speak; The ballot will speak the voice of the people; The ballot must be allowed to say what the people want and we will respect that. If at the end of elections on December 7, the people of Ghana decide that the new president they want is John Dramani Mahama, let nobody dare change that,” he warned.

Hans-Dieter flick: Bayern played great defense and didn't let Eintracht do much
Ajax with the score 13:0 beat Venlo. This is the biggest win in Eredivisie history
Messi doesn't score for Real Madrid after Ronaldo left for Juve. In the last Clasico before the transfer, they both scored
Sergio Ramos: Clean penalty, I was grabbed. It is unfair to judge the referee
Ronald Koeman: I don't understand VAR, it's working against us. Barcelona do not deserve such defeats
Griezmann did not make any effective actions in five matches under Koeman
Ex-referee Andujar Oliver believes that the referee should not have awarded a penalty against Barca in the Clasico
Source https://www.ghanaweb.com/GhanaHomePage/NewsArchive/EC-Chairperson-being-protected-by-joint-police-and-military-team-Kwesi-Pratt-claims-1064935

Justin Bieber has ‘more confidence’ in his relationships now

If you choose NDC, you take two steps backwards - Bawumia to Ghanaians

‘No Nation Can Defeat Its People’ — Jonathan Condemns Attack On Protesters

NSA chairman charges Kotoko management to be transparent in their dealings

Be circumspect in discussions on SARS - Vladimir Antwi-Danso tells media

Ethiopia summons US ambassador over Trump’s “blow up” dam comments

Stakeholders express need for increase in tax on tobacco and alcohol

4 in critical condition after car crash at Breman Essiam

First Lady allay fears of electorate in the December elections

Trade bounces back marginally in Q3 of 2020 - UNCTAD

Coronavirus: Trade bounces back marginally in Q3 of 2020 - UNCTAD

Emotional moment for Rawlings as mother is laid in state [Video]

Election 2020 is about 'Akufo-Addo and others' - Charles Owusu

Coronavirus: Working from home is here to stay - Michael Kwofie

Stop the insults, filthy language in our politics – Prof. Opoku-Agyemang

No shaking, no ‘baga waya’ – Prof Opoku-Agyemang to women on issues of ‘inclusion’

#EndSARS: ‘My Older Brother Lost His Life During A Sickle Cell Crisis In Nigeria At The Age Of 10’

Be Circumspect With Discussions On #EndSARS Protest — Dr. Vladimir Antwi-Danso To Media

“You are a disgrace to all women”

Akufo-Addo’s only claim to fame is free SHS – Mahama

Abroad Is Overrated, Nigeria Is The Best -Man Reveals (Video)

Politicians, public servants will serve well if they swear by our ‘African gods’ – Stonebwoy

I didn't think I will leave Anderlecht this season- Jeremy Doku

You're A Covenant Keeping Leader — Ahafo Chiefs To Akufo-Addo