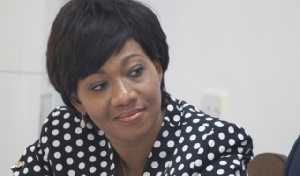 The Electoral Commission (EC) says it has put in measures to ensure that People With Disabilities (PWDs) cast their votes independently.

The training aimed to reduce spoilt ballots during the elections.

It was also to ensure that visually impaired persons used the tactile ballot jacket to cast their votes on December 7, confidently and in secrecy as required by law.

About 400 visually impaired persons from Eight Districts and Municipal assemblies attended the seminar.

The participants expressed their gratitude to the Commission for the seminar and said the training would help them to cast their votes independently during the election day.

Vazquez does not want to renew his contract with Real Madrid. He does not get a salary increase and believes that he is not appreciated
Goalkeeper Elche Badia: Messi is the best player in the world
Villas-Boas pro 1:3 with Monaco: What did VAR do today? Have you had coffee?
Ole Gunnar Solskjaer: Liverpool are a few points behind Manchester United in the Premier League, but they are still the top team
Zlatan about 0:3 with Atalanta: Ilicic could have scored even more. He had a lot of space
Andrea Pirlo: One trophy doesn't change anything. I want to win more
Setien can lead China's Dalian. Benitez left the club yesterday
Source https://www.ghanaweb.com/GhanaHomePage/NewsArchive/EC-outlines-measures-to-make-voting-easier-for-PWDs-1120421

When Does Ghana Remember Her Assets?

Rawlings of Ghana or Africa?

Akufo-Addo is the legitimate winner, EC did not pad votes in his favour - Jean Mensa

VIDEO: Cecelia Marfo Slept With Two Of Her Junior Pastors And Was Treated For Mental Illness

Government Must Reject The Attempt by IPPs To Manage ECG

Baby selling is a dent on the medical fraternity

Energy Storage: High on the agenda for Emerging Economies

Edge SUVs in China has been recalled again

How to build a network where you don’t have one

Vetting: No dirty deals with forces of darkness - Ablakwa fumes over bribe suspicions

Akufo-Addo has no courage to refuse some appointees – Suhuyini

Mac Manu insists election petition is conjectural, but petitioner presses for a review on 'interrogatories'