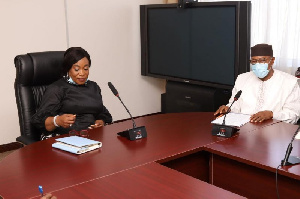 Other members of the delegation include Mr Charles Abani, UN Resident Coordinator in Ghana and Mr Baba Gana Wakil, Special Representative of the President of the ECOWAS Commission in Ghana.

Dr Chambas said the Joint UN and ECOWAS Mission had being touring the five nations in the sub-region, which were scheduled to hold elections between now and the close of the year.

He lauded Ghana for establishing a good track record in the conduct of credible, peaceful and transparent elections, which results were accepted by all.

He noted that the Joint UN and ECOWAS Mission was in the country was to remind Ghanaians of the high track record they had set for themselves in the conduct of credible elections.

He said since their arrival, they had met with key stakeholders such as the Chairperson of the Electoral Commission (EC), who briefed them on their level of preparations towards the elections, where they were now and the way forward.

He said the Commission had assured them that they were ready to conduct credible elections.

He added that they had met representatives of 14 political parties at a forum in Accra.

Mr Chambas noted that the Delegation had had meetings with the National Commission for Small Arms and Light Weapons and the National Peace Council.

Madam Ayorkor Botchwey underscored the importance of elections as a key element in deepening multiparty democracy and accountability in governance.

She noted that Ghana held in high esteem her commitments to democracy, good governance, the respect for human rights and rule of law which "have underpinned our political dispensation".

She commended outstanding work done so far by the UN and ECOWAS towards the conduct of peaceful, free and fair elections in the Region and for the ongoing efforts to calm tensions in Guinea and Cote d’Ivoire.

She added that the Joint UN and ECOWAS High-Level Mission had offered the opportunity to political actors to express their viewpoint on the preparations for the conduct of presidential and parliamentary elections scheduled to take place on December 7.

She assured the delegation of the Government’s support and commitment to work closely with stakeholders for a peaceful, free and fair polls in Ghana.

She mentioned specific measures that had been put in place by the Government, the Electoral Commission and the National Election Security Architecture headed by the Inspector General of Police to boost confidence in the electoral process.

Madam Ayorkor Botchwey expressed the hope that stakeholders would put the interest of the country above all other considerations to maintain Ghana’s enviable image as a beacon of democracy in the Region.

She also underscored the importance of unifying the people of Ghana before, during and after the elections to enable the winning party to safeguard the peace for national development.

The Minister expressed the hope that the delegation would share its findings with government after their interactions with all the actors in the electoral process.

Ex-President of Barca Laporta will take part in the new elections
Antonio Cabrini: Maradona would still be alive if he played for Juventus. The love of Naples was strong but unhealthy
Ferguson on Rashford's charity: Fiction for a young man. He should give me some advice
A Preston player who twice touched an opponent's genitals was disqualified for 3 matches for aggressive behavior
Atalanta Director: everything is fine with Miranchuk, there are no symptoms of coronavirus
Kovid mocks the Latvian championship: the team got only 8 people (but still did not finish the match)
Gerard Pique: We all hope that Messi will stay at Barca
Source https://www.ghanaweb.com/GhanaHomePage/NewsArchive/Election-2020-UN-Envoy-pays-courtesy-call-on-Foreign-Minister-1091884

”He Threatened To Kill Me” – Lil Frosh’s Ex-girlfriend, Gift Opens Up About Their Abusive Relationship

Akufo-Addo is bathing in corruption - Mahama

I never wanted to leave Hearts of Oak - Samudeen Ibrahim

We are not oblivious of the enormous tasks ahead

‘I Don’t Care About Who Talks About Me’ – Bobrisky

First, Second Deputy Governors of BoG inducted as honorary fellows of the Institute of Directors-Ghana

“Power has changed hands, I be number one” – Burna Boy tells his Junior colleagues

Akufo-Addo is best for you, vote for him again – Kufuor to Ghanaians

We will protect nationals and not criminals -CDS

‘How Can You Be Angry That Someone Is Happy’

Nigerian man charges N38,000 per day to single ladies who need a fake boyfriend to flaunt during holidays (Photos)

Some 193 to take part in special voting in Akatsi South

Free SHS and PFJ are my biggest achievements – Prez Akufo-Addo

“Compensate Your Wife With A Car And Go For Mental Screening”

Government is committed to the welfare of Zongo communities – Veep

P. Diddy Celebrates DJ Khaled On His Birthday With Some Kind Heartwarming Words

2020 polls: This is how to cast your vote and fold the ballot paper [Video]

Tension gets to Tuchel at crunch point in season for PSGSport —

Desist from offering party identity to people to cause violence

Maradona’s lawyer calls for investigation into his death