As part of efforts to regulate the conduct of presidential and parliamentary primaries of the New Patriotic Party (NPP), the National Council of the Party, in 2021, issued a Code of Conduct to govern the presidential and parliamentary primaries. Subsequently, the General Secretary acting on the instructions of the National Executives, issued a press statement reminding members of the Party that, the Code of Conduct was still in full force and urged all stakeholders to adhere to its provisions.

On or about August 3, 2022, Hon. Ekow Vincent Assafuah, Member of Parliament for Tafo Pankrono Constituency, during an interview on a Kumasi based station, OYEREPA FM/TV, passed some comments that sought to advance the ambitions of one of the Party’s presidential hopefuls. Despite a prompt from the host of the show that his declaration of support for a presidential hopeful violated the Party’s Code of Conduct for presidential and parliamentary primaries, Hon. Assafuah blatantly maintained his position.

In a related development, a “Health Walk” held on Saturday, August 13, 2022, in Kumasi by some individuals claiming to be supporters of one of the Party’s presidential hopefuls, violated the Party’s Code of Conduct for presidential and parliamentary primaries. Further, comments made by some organisers of the Health Walk and other keynote speakers particularly, Mr. Hopeson Adorye, a member of the NPP, also breached the Party’s Code of Conduct and sought to divide the Party front.

It is worthy of note that, the Walk was held few days after the General Secretary had issued a Press Statement to caution all party members and executives to refrain from acts that breach the Code of Conduct for presidential and parliamentary primaries. Prior to the “Aduru Wo So Health Walk’’ the General Secretary and National Organiser of the Party engaged the organisers of the Health Walk and urged them to abandon such plans as that would be in breach of the Party’s Code of Conduct.

The executives also granted interviews on various media houses cautioning against these imminent infractions of the Code of Conduct. Unfortunately, all these proactive interventions were not adhered to by the organizers.

Subsequently, the attention of the National Steering Committee of the Party was drawn to these instances during the Committee’s meeting on Monday, August 15, 2022. The Committee resolved that Hon. Ekow Vincent Assafuah and Mr. Hopeson Adorye be invited to appear before the National Complaints Committee as provided for in the Party’s Code of Conduct.

Additionally, under the instructions of the National Steering Committee, Mr. Alan Kyerematen has been written to in respect of the “Aduro Wo So Health Walk” that was organized in his name.

Again, in a bid to forestall such occurrences going forward, the National Steering Committee also agreed that a meeting be arranged with all Presidential hopefuls of the Party to court their support and full cooperation in respect of their compliance with the Party’s Code of Conduct. For emphasis, arrangements are being made to that effect.

The Party wishes to further state that, the institution and enforcement of these measures are not intended to aid the electoral advantage of any prospective candidate but to prevent tensions that often arise in the lead up to presidential and parliamentary primaries and secure a united Party front for the 2024 general elections.

Finally, the Party reiterates its commitment to ensuring a free, fair and peaceful conduct of its presidential and parliamentary primaries as it seeks to win a-historic third consecutive general elections (break the eight).

May God bless our homeland Ghana and make the NPP greater and stronger. 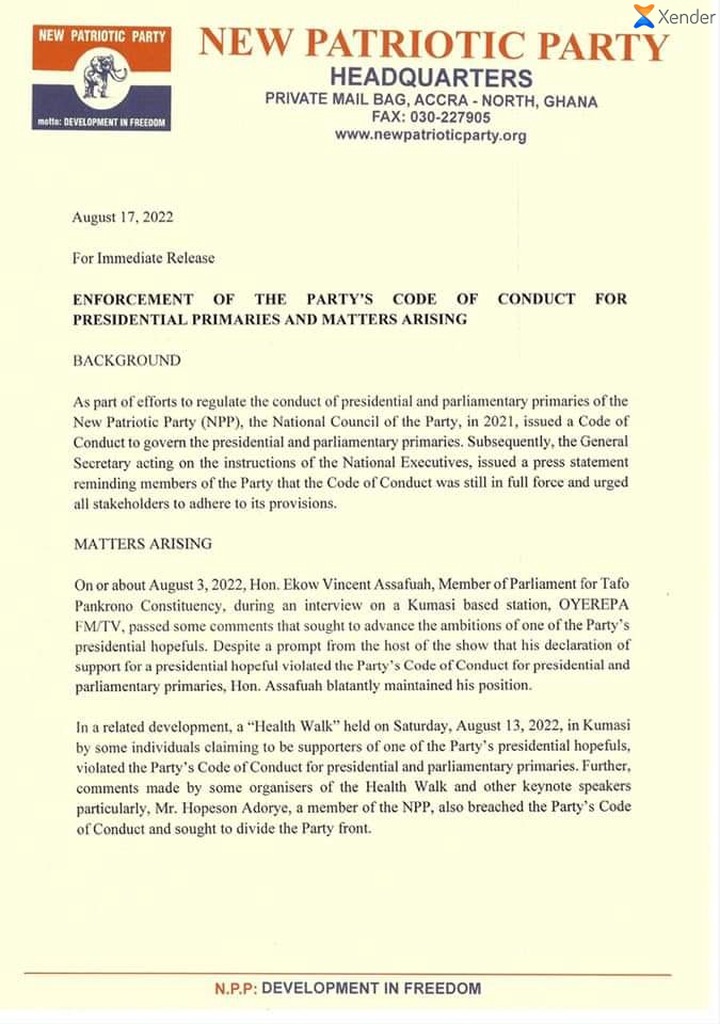