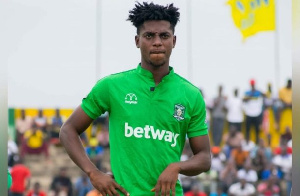 He joined Aduana in 2017 on a three-year deal, with his consistency making him a fan favourite. Despite being a natural right-back, he was converted to a centre-back and excelled.

Amankwah made clear his intentions to leave Aduana and before his exit, reports linked him to Kotoko, Medeama, AshantiGold and Hearts of Oak.

But according to latest reports, the WAFA graduate has secured a three-year deal with Hearts of Oak and will be unveiled in the coming weeks.

Kosta Papic gave the club the green light to sign the player. The Serbian trusts Amankwah, a quality player, can improve his team as they fight for the league title.

Hearts, after a slow start, are second, two points behind leaders Karela United.

Atalanta midfielder Remo Froiler removed from the field in the first leg of the 1/8 final of the Champions League against Real Madrid
Messi scored his 13th goal in La Liga in 2021 - the best result of the top 5 leagues in Europe. Levandowski has a goal less
Bale has scored 4 (2+2) points in his last three matches for Tottenham
Messi scored in the 7th La Liga match in a row and led the list of scorers
Promes returned to Spartak - what do we expect from him?
Javier Mascherano: Barcelona is a special club. It is difficult to find a team with the same ingrained philosophy
Dybala flew to Barcelona for a checkup with a surgeon. He is still concerned about a knee injury
Source https://www.ghanaweb.com/GhanaHomePage/SportsArchive/Ex-Aduana-Stars-defender-Caleb-Amankwah-reportedly-joins-Hearts-of-Oak-1165111

Akeredolu Sworn In For Second Term

I have a sugar mummy and we are both happy

Railway sector has been left deplorable for years - Peter Amewu