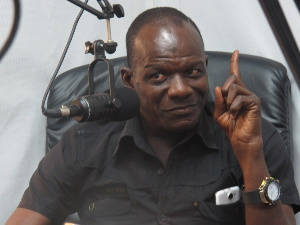 Former Black Stars goalkeeper, Abubakari Damba, has called for the introduction of modern technology into our game to help in officiating decision on the pitch.

Damba was speaking on Happy 98.9FM on the penalty incident which occurred in the Super Clash between Asante Kotoko and Hearts of Oak on Sunday.

In that particular incident, Razak Abalorah came off his line to save Isaac Mensah’s spot-kick which per the rules, the penalty should have been retaken because of Abalorah’s position.

The referee on the day seemed not to have seen the goalkeeper off his line which generated some talks after the game.

According to Abubakari Damba, it is time our football game is developed with the introduction of the Video Assistant Referee, Goal-line technology and other forms of modern technology to help our game.

“Our difficulty currently is that we don’t have anyone or the technology specifically dedicated to the goal line”, he told Odiasempa Kwame Oware on Wamputu Sports on Happy 98.9FM.

“Before the kick, both feet of Abalora was off the line. If there was VAR, the referee would have seen it and called for a retake. The assistant referees could have called the attention of the referee to it but even if they do, what would be the evidence?”, he added.

Klopp corrected the pressure and Trent created the best chances. But the comeback was prevented by the adaptation of Zidane, the rescue of Courtois and the poor implementation of the analysis of Showsport
Raphael van der Vaart: Werner is a blind horse. He just lowers his head and rushes forward
Guardiola about the Champions League: You work for 10 months, and you are judged by one game. You fly out - the season is recognized as a failure. Unfair
Tony on Ronaldo throwing the shirt: A great champion should set an example. I am not impressed with his attitude to the team
3-4 microphones on the players will make football more exciting. Interview with an American who has been changing the sound of the Olympics for 25 years
Barcelona are looking for a left-handed central defender. The club is Interested in Romagnoli, Martinez from Ajax and Senesi from Feyenoord
Rice is Interested in a move to Manchester United. West Ham midfielder asked about the club from Maguire and Shaw

No uniforms for royals at Prince Philip's funeral: media

Nam 1 fires back; Stop linking me to Akuapem Poloo

Liverpool knocked out of Champions League by Real Madrid

‘We love this competition’ – Klopp focused on Champions League return |

I’m not bald, my hair grows every two days

US expected to announce sanctions on Russia over hacking, election meddling

#FreeAkuapemPoloo: I would want to plead with the law to pardon our sister

‘If You Want to Make It In The Industry, Do Dancehall Or Afrobeat And Shun The Rest’- Kimmy

Sunil Mcrewer talks about the importance of time, money, happiness

I will need your support to succeed

I will need your support to succeed - Kwame Opoku to supporters

Kudus can be the next Abedi Pele

Kudus can be the next Abedi Pele - Agyemang Badu

Ghana not down-graded as a low-income country – Finance Ministry

Actress Maame Serwaa undergoes successful surgery, removes fats from her tummy to boost and shape her bortos (+ Photos and video » ™

AFCFTA must be championed by youth – Dentaa Amoateng

MTN sanctions 7,000 MoMo agents for violating ‘No ID, No cash out’ policy

Release Of Schoolgirls Is Work In Progress, Says Presidency

Medikal is a better rapper than Strongman – Ball J » ™

What EU report said about media coverage of election 2020

US to leave Afghanistan 20 years after 9/11, NATO allies to follow

Israel to reopen to vaccinated tourists from May 23

Huawei turns to driverless cars, as no end of US sanctions in sight

EU was compromised to release a sham report on 2020 elections