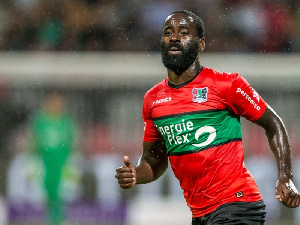 Abeyie has returned to active football

Ghana international Quincy Owusu-Abeyie has made a return to football after joining Dutch amateur side SV Robinhood Amsterdam.

The 34-year-old announced his retirement from football a year ago and ventured into music after difficult spells with the likes of Arsenal, Spartak Moscow, Panathinaikos and Boavista.

He, however, joined SV Robinhood Amsterdam together with former Cameroonian international Eyong Enoh.

Owusu-Abeyie once a huge prospect for Arsenal after coming through the Club’s youth ranks before making the senior team represented Ghana at the 2010 FIFA World Cup having played for the Netherlands at Youth level.

He also played for the Black Stars at the 2008 Africa Cup of Nations tournament hosted in Ghana scoring in the third and fourth playoff match against the Cote d’ Ivoire.

Pogba's time at Manchester United is running out again. The club did not buy a top player, but a beautiful story for social networks, Paul lost the battle for influence to Brun
Roma made an extra substitution in the Italian Cup match. The club faces a technical defeat
The Premier League is investigating the transfer of Snodgrass to West Brom. West Ham banned him from playing against them at the sale
Football has broken into Fortnite. The game will host the Pele Cup, add the uniforms of Man City, Juventus and Milan, and a legendary celebration
Shalimov about Miranchuk: Atalanta is an ideal team for him. Don't go anywhere
Agent about Wendel in Zenit: A risky deal, may not be justified
Shevchenko about Ukraine at Euro 2020: Goal-minimum-exit from the group
Source https://www.ghanaweb.com/GhanaHomePage/SportsArchive/Ex-Ghana-winger-Quincy-Owusu-Abeyie-makes-U-turn-from-retirement-at-age-34-1124648

Shatta Wale Adds Another Range Rover To His Fleet Of Cars » ™

Check out what Stonebwoy’s wife wore on her birthday –

Schools Revert To Normal Hours Of 8am To 2pm In Ogun

FLASHBACK: We are prepared for coronavirus cases - GHS

UK coronavirus variant detected in at least 60 countries, says WHO

Your power doesn't belong to you, be very careful! -Joseph Osafo warns MPs

Moesha Announces She Is Getting Married » ™

Kosta Papic yet to sign Hearts of Oak contract – Report

Mahama's nemeses are the babies of his own hands - Kudus Gbeadese

In farewell address, Trump wishes luck to next administration without mentioning Biden

We’ll advise ourselves over Supreme Court ruling on interrogatories - Ayine

‘Don’t Accept An Ex, They Don’t Come Back Because They Care’

Rawlings will be buried in Anlo state – Families to gov’t

“Why apologize to you that you’re not my father?” – Leila Djansi decends heavily on Kumawood director,  Frank Fiifi Gharbin » ™

‘I Don’t Take My Blessings For Granted’ – DJ Cuppy

Let’s stop the blame game and support the President

I'm not a hypocrite; my children won't go to school - Akandoh

Why target me for assassination when 'borborliborbor' Mahama is alive and enjoying?- Anyidoho asks

They want me dead - Koku Anyidoho

What Russia expects from US on arms control

Ghana must reconnect the tenets of biodiversity security

Election Petition: Mahama’s 12 interrogatories that were dismissed by the Supreme Court

Legon cities are suffering because they owe me 'aseda' - Seer

Rawlings to be buried in Anlo – Agbotui family

Bayern ‘expect’ to lose Alaba, but ‘no decision yet’ on Madrid move |