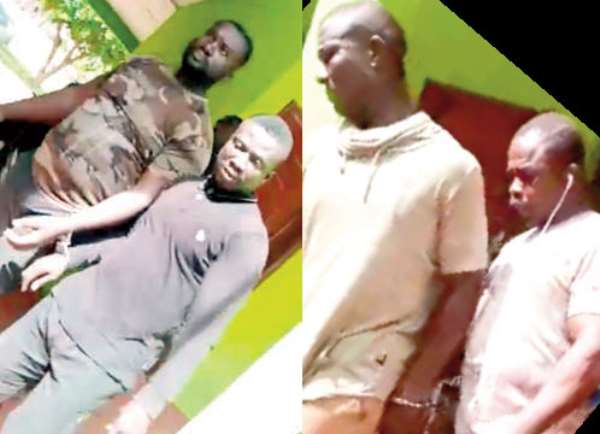 Some 11 persons who allegedly paraded themselves as operatives of the National Security and were undertaking illegal mining activities known in local parlance as galamsey in the Eastern Region were yesterday hauled before a Kaneshie Magistrate Court in Accra.

The 11 are part of a total of 32 people who have been arrested in connection with the illegal mining activities in the forest reserve at Akyem-Akanteng in the West Akim Municipality.

The suspects, according to court documents, as part of their modus operandi had armed themselves with weapons and were undertaking illegal mining in the name of the National Security.

They are also alleged to have terrorised some small galamsey miners as part of their activities and demanded, as well as seized unspecified kilos of gold and huge sums of money from them.

They were rescued by the police from some angry youth at Akanteng after the police had information about the illegal activities in the area.

The police retrieved six weapons including a pump-action gun, a pistol, assault rifles, 12 Gota handsets, handcuffs, electric shocker among others.

Prior to the court's decision, Theophilus Donkor, counsel for nine (9) of the accused persons had prayed the court to grant them bail pending the committal proceedings.

He then told the court that the accused persons were not properly before the court as they had been charged under Section 192(1) of the Criminal and Other Offences Act, 190 (Act 29) and Sub Section 2 required the written consent of the Attorney General before prosecution could be done.

He argued that since the written consent of the AG was not before the court, the charges under Section 192:1 for which the accused persons have been arraigned could not stand.

He added that if the contention of the prosecution was that they were still waiting for the AG's advice, then what it meant was that the charges were misplaced.

Anthony Lartey, who represented two of the accused persons, urged the court not to endorse what he called the 'illegality' perpetuated by the prosecution by keeping the accused persons in custody for seven (7) days before bringing them to court.

The prosecution, led by ASP Sylvester Appiah, opposed the application, saying the accused persons were before the proper court for committal proceedings.

He said the court however, did not have the jurisdiction to grant them bail as they were charged with first degree felony.

Touching on Section 192(2) of Act 29 about the written consent of the AG, he said prosecution had not yet began the process and were only before the court to fulfill the constitutional mandate of bringing the accused persons to court within specified time after their arrest.

He said the constitution did not say anywhere that for the purpose of appearing before a court for remand the prosecution must provide a written submission from the AG, adding that, that argument by the defence lawyers was premature.

The court, presided over by Ama Adomako Kwakye, in her ruling, held that a person charged under Section 192(1) needs the written consent of the AG before prosecution can commence.

The defence lawyers after the court's decision enquired whether the accused persons had been freed, and the magistrate said there was no case before her.

Meanwhile, the accused persons were immediately re-arrested by the police officers who had brought them to court.

Over 200 MoMo agents attacked between January

Vodafone enables musicians and industry players to own personal website

Kennedy Agyapong honoured on his 61st birthday with youth conference

GMA will recommend re-imposition of Coronavirus restrictions if need be

Bright Addae wants to play for Kotoko before retirement

We are surprised by court order to Jomoro MP – NDC lawyer

Double sale of lands on the rise – Lands Commission warns

Speed up adjudication of Hearts' petition against Olympics – Medeama CEO