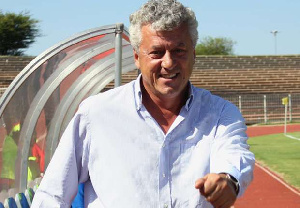 Mohammed Polo, a man regarded as the best player in the history of Accra Hearts of Oak has called for support for head coach Kosta Papic.

Mohammed Polo believes that with support from the club’s management and supporters, Papic can lead the team to a league victory.

Papic was brought in to replace Edward Odoom following a sub-par run to the start of the season.

Since coming in, Papic has turned the club’s fortunes around with the club currently second on the league table.

In an interview with GhanaWeb, Mohammed Polo lavished praises on Papic for a great start to his career.

He noted the early signs of Papic’s Hearts of Oak look good and that with support from the club’s hierarchy, he will lead them to success.

“He has been fantastic so far. He is doing well and we hope he will maintain the form. There are reports that he says he wants to win the league for Hearts of Oak, we must all back him. Let’s support him because he can do it. He needs some consistency so if he is able to get that constituency then he can win it. You look at where he picked the team from and where we are now, it shows that he has something good to offer”, he told GhanaWeb.

Hearts, meanwhile are preparing for the ‘Mantse derby’ against Accra Great Olympics on Sunday.

A win for Hearts and a defeat or draw for Karela could see the Phobians jump to the summit of the league table.

Singer Adina undergoes surgery to have Fibroids removed, shares video of the experience » ™

You Deserve To Spoil Yourself After Working Hard

Hearts of Oak vows to give Boadu the freedom to work

Many Youths Are Under Pressure To Succeed – Yul Edochie

If You Catch Him Cheating More Than Twice, You Can’t Change Him: BBNaija’s Cindy

F0olish People, How Can Such A Big House Be Rented

How I Met My Wife – Actor Samuel Ajibola

Don’t Expect Me To Give Because Others Are Giving – Tacha

Revealed: How Aduana Stars player was arrested after crashing police officer to death

“They Want To Find The Solution, But They Don’t Respect”- Streetbeatz Jabs Colleague Producers

Africa is not on track to achieve zero hunger by 2030

U-20 AFCON: We want to repeat 2009 success – Precious Boah ahead of Uganda final