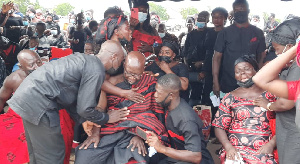 •The Police officer who was killed in a bullion van attack on June 14, 2021, was buried today

It was an emotional sight as Father of the late lance-corporal, Emmanuel Osei, who was allegedly killed by some assailants during a bullion van robbery attack wept uncontrollably at the burial ceremony of his son.

Both parents were inconsolable at the burial grounds but the tears of the late lance corporal’s father intensified as it took a number of sympathizers to comfort him.

The popular saying ‘men don’t cry’ went missing at this particular moment as the late Emanuel Osei’s father was seen in some viral pictures seated with his wife and ‘crying his head off’.

The mortal remains of the late Constable General Emmanuel Osei now promoted to the rank of a Lance-corporal, has been laid to rest today, Saturday July 24, 2021.

The burial ceremony was witnessed by scores of sympathizers notably the Interior Minister Ambrose Derry, members of the Ghana Police service and many others.

The burial service took place at the Kasoa Nyanyano Kakraba School Park in the Gomoa East District in the central region.

Meanwhile, the police have since the bullion van robbery incident arrested some four suspects.

The suspects according to reports were fished from their hideouts at Kyebi by the police at a mining site upon information gathered by the CID Headquarters in Accra.

Watch the pictures below: 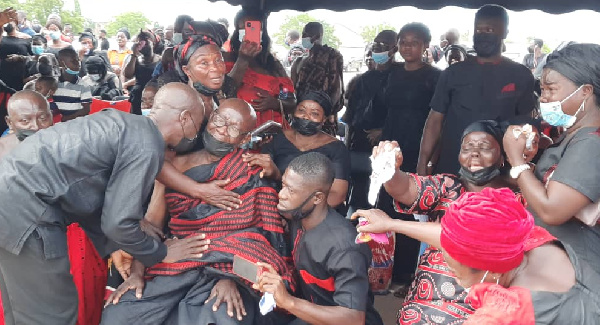 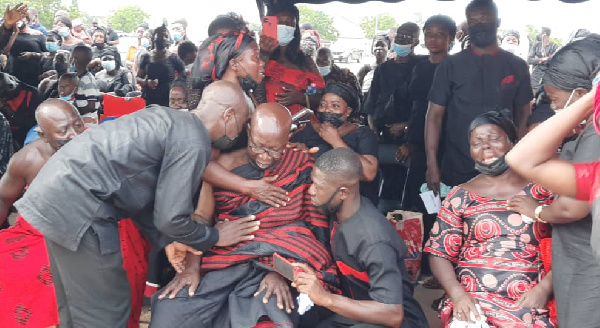 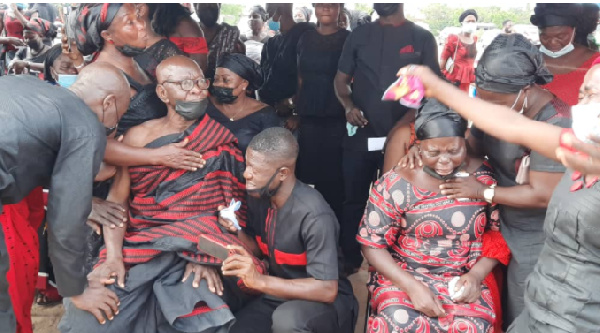 Neymar on 2:1 with Lyon: It's hard to win back, you need to run twice as much. PSG sacrificed themselves
Lineker on Noble's exit on a penalty kick: An incomprehensible decision. The same thing happened with England at the Euro
Kier suffered a muscle injury. He was replaced in the match with Juve in the 1st half
Manchester United, losing in the course of the Premier League matches, has scored 35 points since the beginning of last season. Liverpool has 20 points
Messi started poorly at PSG: 0 goals and 0 assists in 3 matches. It seems that the replacement in the game with Lyon offended him
Pochettino on replacing Messi: You may like it, or you may not like it. The coach makes decisions
Ancelotti on 2:1 with Valencia: We won not because of the quality, but because of the indomitable spirit of the team

(+VIDEO) Please don’t be playing with my n!pples

Nana Addo should embrace John Mahama’s “Do or Die”

#FixTheCountry to burn tyres over no DCE in SALL – Convenor

Mr. Drew Suggests He Doesn’t Want to Beg Like Psalm Adjeteyfio When He Retires From (Watch)

I was forced to give birth

RCBs call for govt’s intervention in locked up funds

I’m scared of not being able to settle down – Camidoh

National Dean of Presiding Members thanks President and Minister for nominations

Rights to freedom are essential to democratic governance

CAF Champions league: Hearts ease past CI Kasmar to book a spot in second round

Hearts to face Moroccan giants Wydad Casablanca in next round

CAF Champions League: Hearts to face Moroccan giants Wydad Casablanca in next round

(+VIDEO) “My biggest fear is to go broke and beg after retiring from music – Mr. Drew » ™

Only one person can represent the President at local level

Some NDC leaders are only pursuing their personal interest

2024: NPP torn between a ‘liar’ and an ‘incompetent’ Trade Minister

NDC not a serious entity; we’ll defeat them again in 2024 simple

Some NDC leaders are only pursuing their personal interest - Solomon Nkansah

NDC not a serious entity; we'll defeat them again in 2024 simple - John Boadu

Emmanuel Toku scores for Botev Plovdiv in win against Beroe

Gladson Awako denies Hearts exit has to do with juju

Benyiwa Doe was a true fearless nationalist, confidant of Atta-Mills

Akufo-Addo to address the UN General Assembly on September 22

Adjei Sowah out, Elizabeth Sackey in for Accra Mayor position

Ama Benyiwa Doe was my good friend in parliament – Akufo-Addo