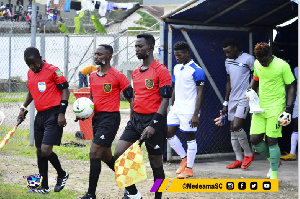 Former Ghana Premier League referee, Rahman Fallalu appears to know the cause of poor officiating in this season's top-flight.

Referees have been in the spotlight after every matchday, with their poor decisions earning them massive criticism.

This past weekend, referee Maxwell Kofi Owusu had his own share of criticism after mistakes in the game between Hearts of Oak and Elmina Sharks.

He awarded Hearts a dubious penalty and reduced Sharks to 10 men. Apart from that, he ignored his assistant who spotted an infringement by Sharks goalkeeper before the kick was taken.

However, he surprisingly admitted his errors and issued an apology on social media.

This is one of many incidents of bad officiating that has characterized the season, and Fallalu has blamed inexperience as the cause.

“The wholesale promotion of the referees after the Anas expose is the cause of officiating problems in the Ghana League,” Rahman told Saddick Adams on Angel FM Accra.

“The mistakes are bound to happen, but with time they will grow, we should help them.

“The referee’s appointment committee should know the matches and the type of referees to officiate those games.

“When I got promoted from Division One during my time, I spent three years to understudy before I got the chance to officiate matches”.