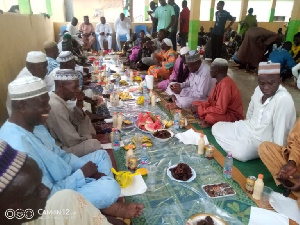 The Ifter was organised on behalf of Mr Mahama by Alhaji Yussif Sulemana, former Bole MP

Former President John Dramani Mahama has on 3rd May 2021 organised an Iftar (evening meal to breakfast in Ramadan) for the Muslim Community in Bole at the Bole Central Mosque.

The Member of Parliament (MP) for the Bole-Bamboi Constituency Hon Alhaji Yussif Sulemana represented the former President at the event which saw many leaders of the Muslim Community in Bole as well as the National Democratic Congress (NDC) Executives for the Savannah Region and Bole Bamboi Constituency in attendance with a variety of food and drinks served.

Speaking to Bole based Nkilgi Fm at the Iftar, the MP Hon Sulemana disclosed that former President John Dramani Mahama made him organise the Iftar meal for the Muslim Community within Bole town in the month of Ramadan.

The MP said in 2019 an Iftar was organised but it could not be the possible last year 2020 because of the COVID-19 pandemic.

He said the Iftar will be a continuous event in every year in the month of Ramadan.

The MP further disclosed that former President John Dramani Mahama has also given 20 bags of rice to share to some prominent people on Bole and he hopes for more of such support from individuals.

The Savannah Regional Chairman of NDC Alhaji Moro Seidu thanked the Bole Chief Imam for organising the Muslim community for the Iftar and added that togetherness is the best way of solving disputes. He said coming together to breakfast or take iftar is one of the many things that attract reward from Allah. 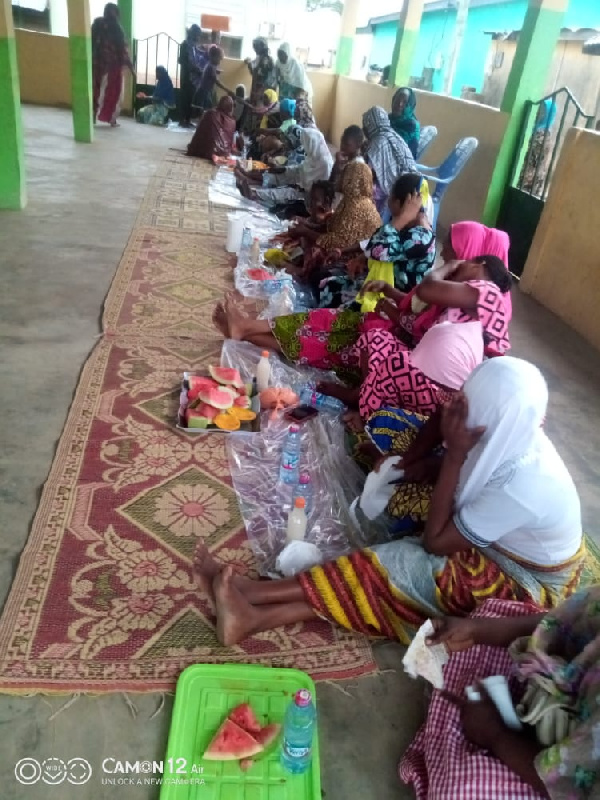 Alhaji Shaibu Timtey on behalf of the Chief Iman of Bole offered special prayers for the organisers of the Iftar. He quoted some verses from the Quran which says “givers do not lack”. He called for God’s blessing for former President John Dramani Mahama, the MP Alhaji Yussif Sulemanan and the Savannah Regional Chairman of the NDC Alhaji Moro for their efforts in supporting Islam.

Tuchel on Guardiola: When you play with Pep's team, you realize that the most difficult match has come
Solskjaer, Bielsa, Allardyce and Bruce are up for the title of best coach of April in the Premier League
The 28-year-old Toven moved to the Mexican Tigres. The 2018 World champion will play with Gignac
Hans-Dieter Flick: Lewandowski thinks about Gerd Muller's record. Robert is a world-class footballer, he is unique
Our blogger visited the Hall of Fame of International Football - it turns out that he is in Mexico. The creation was approved by Blatter, among the members of Lev Yashin
Mikel Arteta: Not playing in the Champions League for 5 years is a trend. Arsenal will not put up with this
Raul can take over Eintracht Frankfurt

Allowance for Election 2020 field operatives to be paid soon– EC

Friday Debate: Is the Sports Minister justified in raising $25m for the various national teams?

How can Akufo-Addo be faithful to Ghanaians when he deceived God with a cathedral? - NDC man asks

Hearts of Oak has no integrity - Mamane Lawali's agent

You won't get a pesewa from me - Mallam Yahaya to GFA

Court orders Opuni to open defence on May 17

I’ll keep talking, shouting and pointing the nonsense in this country – Captain Smart

COVID-19 vaccine supply hitches could reignite upticks in Africa – WHO

Right to Information Commission extends date of submission of report

Here's why you should market your business online

E/R: Student flogged 25 times at St. Stephens SHS despite law against it

Eid-ul-Fitr: May 13 declared as a statutory public holiday

Ghana gets second batch of AstraZeneca vaccines from Covax

Ashgold coach quits after one month

The days of political blind-following are over - Politicians told

Today in History: Such arrant lie; when did you resolve 'dumsor'? – Jinapor challenges Bawumia

Double track can be ended with proper infrastructural distribution – IFES

Wey Gey Hey fasting brouhaha: What we know so far?

#FixTheCountry: Here are 3 other hashtags that triggered protests

Ghanaians urged to be vigilant over rising cases of missing persons

Cases of missing persons on the rise [Video]

FLASHBACK: A great curse will befall NPP if they increase taxes – Allotey Jacobs

It's 'illicit, unacceptable' to hike fares by 40% – Alliance of Drivers

IDeL-UEW to Establish Study Centres in Some West African Countries

Investing in Agriculture is not risky – Dr. Bawumia to financial institutions