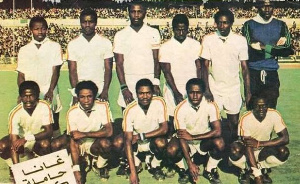 Ghana won its fourth AFCON in 1982

Mohammed Ahmed Polo, a member of the 1982 Africa Cup of Nations winning squad has described late former president Jerry John Rawlings as a go-getter who had an infectious way of motivating people to achieve a course.

As it has been reported over the year, despite qualifying for the 1982 AFCON in Libya, Ghana had decided not to participate with the government then citing lack of money as the reasons.

But months to the tournament, Rawlings toppled the Limann government and one of his immediate assignments was to get the Black Stars to represent at the AFCON.

History has it that the then head of state assembled the players and appealed to them about the nation’s dire financial status but urged them to go and win the tournament for the country.

Indeed, the team went, saw and conquered Africa, winning the tournament for the fourth and last time.

As Rawlings transitions to the ancestral world, GhanaWeb spoke with a member of the 1982 winning squad who opened up on the conversation that was held between the team and the enigmatic leader.

Polo recounts that Rawlings was honest to them about the state of the country but motivated them with his story.

“Rawlings had a way of motivating us. When he wanted something, he will just tell you to go and get it. At the time, Gadafi was his friend so he told us ‘Gadafi is my friend, go and win it’. We went there and indeed won it. He is someone with conviction.

“He had passion for doing something and that motivated us a lot. It was not about money motivation. He came to us a revolutionary and told us to go and get the cup. That is the motivation. Things were difficult in the country so he didn’t make us any promise. He just told us to win the cup”.

Mohammed Polo further disclosed that after the tournament, the team met Rawlings who promised to reward but that never came.

He bemoaned the failure by successive government to honour the promise the state made to the players.

Dzyuba supported Pyotr Yan on the eve of the fight with Sterling at UFC 259
Simeone on the title race: They said that Real Madrid and Barca have no chance, but look where they are now
Willian made an assist in Arsenal's third match in a row
The March matches of the South American selection of the 2022 World Cup can take place in a bubble in a European city
Zidane on Benzema before the derby: We won't take any chances. Those who are 100% ready will play
Can you guess a coach based on his career as a player? It's easy with Zidane - but with Flick and Gasperini?
Zidane is categorically against Bale's return to Real Madrid (Defensa Central)