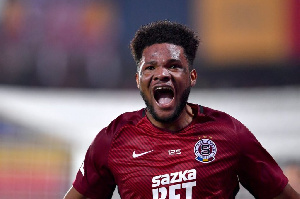 Tetteh is leaving Turkey after a successful loan spell with Yeni Malatyaspor, where he netted five goals in 32 games.

His performances has attracted several clubs in Turkey but Gazietep are eager to sign the 23-year-old.

GHANASoccernet.com can exclusively report both parties are set to meet and negotiate a deal.

Meanwhile, it is understood that Yeni Malatyaspor could trigger the option of making the move a permanent one.

However, as it stands Tetteh will be heading to the Czech Republic to continue his career.

Tetteh has in the past been linked with English Premier League side Wolverhampton Wanderers.

He previously played for Dreams FC in Ghana, Standard Liege in Belgium, and Bohemians in Slovakia.

Messi, Neymar and Suarez will burn at the Copa America. Find out with the help of our test, which Copa team is more suitable for you
Peter Schmeichel: UEFA has offered the Danish national team three options: to finish immediately, at noon the next day, or to count 0:3. Did the players have a choice?
Spain is learning to play without Ramos, Pique, Carvajal and De Gea (and possibly Alba). On the right in defense-a midfielder, in the center-two left-handers
Rhodri: England could field three teams. They are among the obvious favorites of the Euro
Goalkeeper of the national team of Ukraine Buschan about the match with the Netherlands: I do not consider myself a hero
The match between Denmark and Finland could not be played on the same day. The players didn't have to decide that
A fan fell from the Wembley stand at the England - Croatia match. He is in hospital in a serious condition