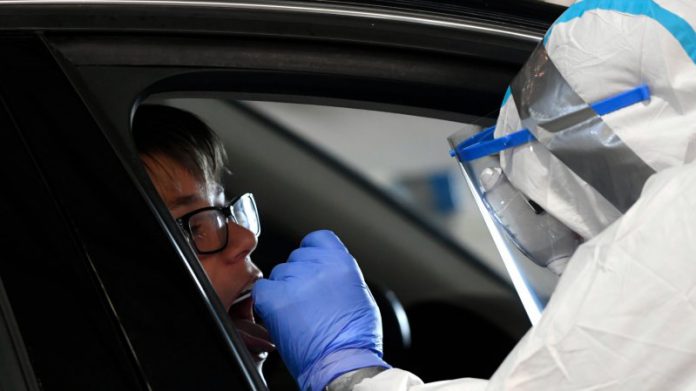 dpa/GNA – The German government’s plan to roll out mass testing as the country considers ways to ease out of lockdown has been delayed, leading to criticism from the political opposition and top economists on Tuesday.

Health Minister Jens Spahn announced last week that all citizens would be offered rapid antigen testing for free at facilities across the country, in specially established centres as well as existing chemists and practices, from March 1.

However, government spokesman Steffen Seibert said on Monday that the proposal would first be discussed on March 3, when Chancellor Angela Merkel is to hold her next round of lockdown talks with regional leaders.

“It is indicative of Mr Spahn’s incapacity that the rapid testing strategy is to be delayed again,” said Anton Hofreiter, who leads the Greens’ group in parliament.

A discussion on easing restrictions, which include sweeping business closures and strict limits on socializing, must go hand in hand with more testing, Hofreiter argued.

“Therefore I expect of this government that after a year of pandemic it is finally in a position to meet such basic requirements,” he added.

Clemens Fuest, president of the ifo economic research institute in Munich, said it was a “tremendous failure” on the part of politicians that a testing strategy had not yet been set up.

Germany needs a plan for testing, tracing and isolating in order to emerge from lockdown, Fuest said in an online event on Tuesday hosted by the Foundation for Family Businesses.

Gabriel Felbermayr, president of the Kiel Institute for the World Economy, said it was “appalling” how few tests were conducted in the country.

Around 30 per cent of positive cases contracted the variant called B117, the association of medical laboratories ALM said.

This figure had previously risen from 6 per cent to 22 per cent in two weeks, according to the Robert Koch Institute (RKI) for disease control.

Experts said while the rate of positive tests had declined, the increased proportion of more contagious variants could be behind the recent stagnation in case numbers, which had previously been falling.

On Tuesday, 3,883 new coronavirus infections and 415 virus-related deaths were reported by the RKI. Almost 2.4 million people have contracted the coronavirus in Germany and 68,318 have died, according to RKI figures.

Andrea Pirlo of Juventus Turin: Juventus continues to fight for the scudetto. We will try not to repeat our mistakes
Guardiola wants to see Atalanta defender Gozens at City in the summer. The club is ready to release Zinchenko (TMW)
Sulser and the Show will not be punished for the words of the judges after the game against Chelsea
David De Gea: Manchester United must beat clubs like Chelsea to win trophies
In Athletics, they founded a ska-punk band (the coach is a fan). The football charts are already so crowded-we remember other players-musicians
Barcelona is ready to sell Griezmann for 60 million euros, but can not find buyers (Ok Diario)
Tottenham will play the 1st match with Dynamo in London, the second-in Zagreb

VIDEO: What Did You Gain After Spewing Such Lies About My Daughter And Breaking My Spirit?

AFCON U-20: We were more determined to win - Karim Zito

I could not penetrate after attempting to defile her

The then Board Chairman, Tender Committee not aware lithovit was untested-Witness

Most Celebrities Are Desperate For Endorsement Deals – Actress Nnaji Charity

How To Identify A Good Woman – Wizkid

Not All Celebrities Are Worth Being Role Models – Actress Isaac Chinwe

Name And Shame Those Behind Kidnappings In Zamfara

The Abuse on Social Media Is Too Much, Cyber Bullying Should Be Punishable By Law

Ghanaians ‘joke’ as Akufo-Addo addresses the nation on Covid

VIDEO: Stonebwoy Will Be The Best GHAMRO President

Playing Fair And Being Scared Gets You No Where In This Country, You Have To Be Ruthless To Get Far

“We had s3x on our first date and we are now happily married” – Lady shares beautiful wedding photo, confuses netizens  » ™

Aisha Modi Says Mona is Indeed A Lawyer, Mentions Two People Who Attended Law School With Her In The US » ™

Judicial Service threats are assault on media freedom in Ghana

Samini To Drop Another Hot Diss For Shatta Wale, Asks Fans To Subscribe To His YouTube Channel For The Songs Videos

I Slept By a Woman For 3 Years Without Sex

“Can’t You See Producers Are Asking For Their Monies”

Kyebi, Others Partner ECOWAS For ‘Vision 2050’

Parliament Will Be Effective Under My Watch – Speaker

Do Away With A Dirty Heart

“The Game Is About To Begin”

I am haunted by fans’ death

“Be Careful Who You Feed, People Fanfool To Eat”

EducationMark for private universities in Ghana

Reggie Rockstone and lookalike children cause stir with cute photos

Election Petition: Why are we being told to accept the SC ruling? - Kwesi Pratt queries

Rapper, Obibini Pleads With The President To Let Entertainers Get Their Vaccine As Early As Possible

Cock in trouble for killing owner