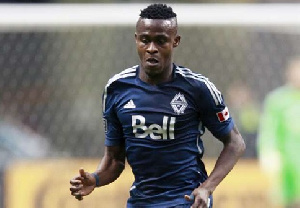 With nine games to end the 2020/21 season, former Inter Allies star Gershon Koffie is optimistic the Capelli Boys will escape the drop considering their recent outing.

After 25 games in the Premier League, the Eleven is to One lads are languishing at the bottom of the 18-club league with 23 points but their former star believes they have what it takes to survive.

Inter Allies have enjoyed a wonderful outing in their last three games, winning twice and drawing one, scoring 8 goals in the process and conceding just one.

Following their recent form, Koffie believes the mojo to do the magic for the Capelli Boys is back.

“It’s possible for Allies to get out of the relegation,” he told footballmadeinghana.com

“If they keep winning as they have started, they will make it and I’m very hopeful they will.

“Every point counts at this time and they must just stay be focused, determined and fight till the last second,” he encouraged the players.

Koffie currently plies his trade in the USL in America with Indy Eleven after a wonderful outing with Hapoel Kfar Saba in Israel.