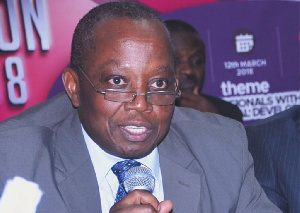 The Ghana Anti-Corruption Coalition (GACC), has urged the President to set-up a Commission of Inquiry to investigate allegations levelled against Mr Daniel Yao Domelevo, Auditor General by the Board Chair of the Ghana Auditor Service.

Mrs Beauty Emefa Narteh, the Executive Secretary of the GACC said Ghanaians deserved to know what the issues were concerning the decision by the President to ask Mr Domelevo to retire based on allegations raised by the Board.

One of the allegations is that Mr Domelevo was supposed to have attained the retirement age(60 years) last year and not this year as he suggested.

“There is more to this and that the citizens must know. We need to make every information public. It is not too late for the President to set-up a Commission of Inquiry to investigate this matter otherwise we have not being fare to Mr Domelevo,” Mrs Narteh stated in an interview with the Ghana News Agency in Accra.

She said the report of the Commission of Inquiry would give Ghanaians the opportunity as a nation to know what the issues were.

She said aside Mr Domelevo being asked to proceed on leave last year, “Ghanaians were now saddled with another nightmare; the Auditor General was now being accused of a few things including not being a Ghanaian and he having attained the retirement age last year, which the Auditor Service Board Chair came out to talk about.”

The Executive Secretary said for the sake of the principles of transparency and accountability, Mr Domelevo must be given a fair hearing.

“And we’ve not heard and we are yet to see if the Auditor General was given that fair hearing. Our expectation is that the President would even form a non-partisan Commission of Inquiry and task them with the responsibility of investigating the accusations levelled against the Auditor General from the Board Chair of the Ghana Auditor Service,” Mrs Narteh said.

She said once the “Commission comes out with its report, it would then be made public for Ghanaians to know the truth of the matter”.

Mrs Narteh said, as an anti-corruption coalition, it was their expectation that due process would be followed, adding that even though they appreciated the work of the Auditor General, they would not be condoning him if he was in the wrong.

“We believe that it is very important that the principle of transparency and accountability to be applied in this matter. Citizens need to know exactly what the issue is. And also Mr Domelevo needs to be given a fair hearing to defend himself in terms of this issue. It should not be left to the President asking him to retire. It is a sad day for us. It is sad that somebody who is helping you to save money can just be disposed of like that,” Mrs Narteh said.

“How many people would be prepared to go to the extreme for Ghana? If they don’t feel that the nation can protect them? If we don’t do anything to bring this to light and give Mr Domelevo a fair hearing, this particular thing is going to dissuade people from going the extra mile to fight corruption in their respective institutions.”

On his part, Mr Franklin Cudjoe, the Founding President of IMANI Africa, told the Ghana News Agency that “the truth be told, I am lost for words”.

Dumsor is killing me, I can’t sleep anymore – Vim Lady

A/R: Over 500 houses earmarked for demolition in Afigya Kwabre South

What to know about Somalia’s latest political crisis

Tension brewing at Ministry Of Foreign Affairs over recruitments of 320 family and friends; career diplomats in rage

I have no intentions to organize a dumsor vigil now, let me be! – DKB warns

‘I won’t act on hearsay, mere allegations’, give me evidence – Akufo-Addo

Zebilla: Fighting snakes, animals to learn under trees — The struggles of pupils of Asobelaga Anglican Primary