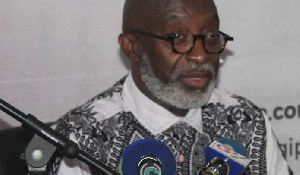 Ghana has recorded total investments of US$869.47 million, with total Foreign Direct Investment (FDI) value amounting to US$785.62 million between January to June 2020.

Mr Yofi Grant, the Chief Executive Officer of the Ghana Investment Promotion Centre (GIPC) at a press conference on FDI Half-Year Investment, said the FDI inflow showed rare strength in the final moments of the second quarter of the year, undeterred by the COVID-19 pandemic.

He said the total investment of US$785.62 million represented investment recorded by the Centre and the Petroleum Commission.

Worldwide, the United Nations Conference on Trade and Development (UNCTAD) has estimated that the COVID-19 pandemic would send global FDI plummeting by about 40 per cent - driving the total value of FDI below US$1 trillion for the first time since 2005.

Mr Grant said in spite of a sluggish start in the first quarter of 2020 and a worrying slump at the beginning of the second quarter due to severe lockdown measures to contain the spread of the virus, FDI to Ghana had started to rebound resulting in a notable increase in FDI inflow for the first half of the year.

He said out of that, the total FDI component amounted to US$627.52 million, while the local component accounted for an estimated US$61.22 million.

“The FDI value of US$627.52 million was a considerable increase of about 409.10 per cent from last year’s FDI value of US$123.26 million recorded within the same period (Jan-Jun 2019), depicting a strong performance, irrespective of the global pandemic,” he said.

Mr Grant said out of the 69 projects recorded, the services sector registered a majority of 25 projects followed by the manufacturing and export trade sector with 21 and 11 projects respectively.

He said regarding the value, general trading recorded the highest amount of US$246.05 million and that was tailed closely by the mining exploration sector with US$231.02 million, having sealed some major investments such as the Chirano Gold mine project for the exploration of minerals.

The CEO said the manufacturing sector also saw significant investments valued at US$170.67 million on the back of some notable ventures such as a deal by Matrix industries for the manufacture of paper and aluminium products as well as the Rainbow Paints Limited project, which was a joint venture between Ghana and Kenya for the manufacturing of paints and related products.

Geographically, the spread of the projects, cuts across six regions namely - Greater Accra, Central, Eastern, Ashanti, and Volta regions - with most projects registered in the Greater Accra enclave.

Together, the 69 projects are expected to make a significant contribution to job creation in the country.

He said per estimations, a total of 14,614 jobs were expected to be created when the projects were fully operational, out of, which 14,052 of the jobs representing 96.15 per cent would be for Ghanaians, whilst the remainder of 562 jobs, representing 3.85 per cent, will be taken up by foreigners.

The GNA also gathered that additional equity totalling US$11.56 million was re-invested by existing companies within the first half of the year, while a total of GHC1, 365.26 million was recorded as investments from 28 wholly-owned Ghanaian businesses.

He said the seemingly positive performance of FDI inflows to the country was to an extent, due to the gradual easing of the COVID-19 restrictions as well as government initiatives and incentives rolled out to buffer businesses and the economy at the height of the pandemic.

Mr Grant said regardless of the performance, the United Nations Conference on Trade and Development predicted that FDI would continue to see a decline of five to ten per cent in 2021 with a slow recovery to be initiated in 2022 driven by restructuring of global value chains and a general rebound of the global economy.

He said the GIPC remained cautiously optimistic about the flow of FDI to Ghana, as the country moved forward.

Mr Grant said the Centre would continue to assiduously pursue worthwhile investments for economic development, including Government’s initiatives to support the economy amid COVID-19.

Striker Berisha Of Salzburg: We were better than Loko and deserved to win
Pep on city's 1st place in the Champions League group: we played very well in all the matches
Shakhtar defender Vitao on 2:0 with Real Madrid: the main Thing is not to fly too high in the clouds
Kiknadze and Meshcheryakov-out! Rabiner after Loko's defeat by Red bull
Real Madrid conceded 9 goals in 5 rounds of the Champions League group stage for The first time
Flick about 1:1 with Atletico: after Muller and Gnabry came on as substitutes, Bayern added to the movement
Muller scored his 47th goal in the Champions League and moved into 10th place ahead of Inzaghi. Zlatan and Shevchenko have 48 goals each
Source https://www.ghanaweb.com/GhanaHomePage/business/Ghana-records-785-62-million-FDI-in-2020-half-year-1091872

“Must You Go Nude To Promote Your Product?”

Thomas Partey out of action until new year - Report

Is Jeffrey Schlupp one of the Premier League’s most underrated impact players?

‘I Thank God That I Have Very Few Friends’

‘Be Selfish With Your Peace Of Mind’, Stella Damasus Advises

Buhari Appreciates Nigerians For Patience, Urges Use Of Gas As Alternative To Petrol

Special Voting: EC not responsible for missing names on voters register in Kumasi

145 special voters fail to show up in New Juaben South

Huawei begins to get rid of Android on its smartphones

Zeepay poised to be 2nd largest MoMo operator next year

Fuel Prices To Go Up In December

Re: Transfers Of Tax Revenues By GCB To “Unknown Sources”- GH¢ 52.5 Billion

Newcastle game with Villa postponed due to Covid outbreak

Stakeholders asked to collaborate to meet Target 8.7 of SDG

Man who earns GH¢ 308 monthly took lady out, she ate food worth GH¢69 and this happened

40 persons fail to vote in Special Voting in Bongo

NDC not interested in churning out fake news – Asiedu Nketiah

President calls for interdiction of security agent for assaulting a soldier

Expansion works on Sunyani Airport to be completed on this date

#EndSARS: ‘I No Longer Hide My iPhone When I See Nigerian Police’

We Need To Buy New Cars, Please Stream Our Songs

GH Election 2020: Why Do Politicians Wait Till Their Fourth Year In Office Before Doing Things?

Your claims against me ‘most unfortunate’ – Prof. Adei to Mahama