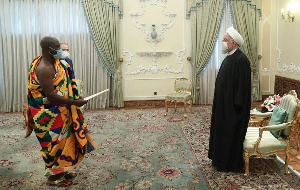 It is the credential presentation season across the world as ambassadors meet presidents of their host countries to announce their presence and pay diplomatic respects.

Over in Tehran, capital of Iran, Ghana’s ambassador Eric Owusu-Boateng dispatched this diplomatic task earlier this week with some clothing style.

At his meeting with President Rouhani, Ambassador Owusu-Boateng wore a colourful Kente cloth along with traditional slippers, which dressing gained traction on social media.

Receiving the credentials President Hassan Rouhani said: "The Islamic Republic of Iran is interested in developing cooperation with Ghana in the economic and scientific fields and taking advantage of the opportunities available for extraterritorial cultivation.

"The expansion of cooperation between the private sectors of Iran and Ghana can play an effective role in enhancing the level of bilateral interaction, and the two governments should encourage the private sector, and provide the necessary support for their cooperation," he added.

Vazquez will miss the rest of Real Madrid's season. He has a sprained cruciate ligament
Mesut Ozil: Real Madrid are the favourites for the La Liga title. Benzema - the best striker of the championship
Bixant Lizarazu: Benzema is one of the best players in the history of French football
A cautious line-up hurt Barca in the first half and forced them to go all-in. Second half = fun
Messi does not score against Real Madrid after Ronaldo's departure to Juve. In the last clasico before the transfer, both scored
Modric-Pique after the clasico: Waiting for the referee to complain, right?
Actor of the year in the English League 1: hit the ball in the head of an opponent and pretended that it was not him

Check out photo of Dangote before becoming a billionaire

Robotic lizards could be the future of disaster surveillance, say researchers

GRA tax payments to be fully automated from May 2021

Bring back the spirit of communalism

My pastor treated me like a burden, kicked me out when I needed ‘church’ the most – Man narrates

Why £45m signing is struggling to prove his worth to Arteta

Libyan PM, ministers due in Turkey on Monday |

I’m only motivated by sex and money

Afghan army could hold territory without support, but ‘difficult’

Number of dead in Myanmar crosses 700 as clashes intensify

Arsenal’s Partey problem: Why £45m signing is struggling to prove his worth to Arteta

Moments Ghana’s presidents shared with him

Let’s bring back communalism and volunteerism for environmental cleanliness

How table tennis changed the world, 50 years on

Ghanaians endorse taxation but say information hard to get

Drinking Too Much Water Can Kill You!

US defense secretary in Israel amid Iran nuclear talks

Don’t be partisan in your dealings – Ofosu-Ampofo to Bagbin

God chose me to be Speaker for all Ghanaians – Alban Bagbin