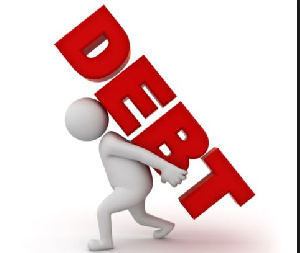 Moody's forecasts also include disbursements under the $2 billion financing deal with Sinohydro -- an infrastructure financing deal that is collateralized by the country's yet to be mined and refined bauxite resources.

This is at an assumed annual execution rate of about $100-$200 million in the funding requirements and in the debt ratio.

“As a result, the debt burden has risen by nearly 10 percentage points of GDP since 2017, in part as a consequence of the financial sector bailout in 2018-19 and the measures taken to clear legacy power utility debts (estimated at 4.5% and 2% of GDP, respectively).”

Estimated at around 64% of GDP at the end of 2019, Moody’s said it is expected to rise further over the near term, adding “How far and for how long it rises will depend in part on the government's success in preserving exchange rate stability and in dealing with additional contingent liabilities arising in the energy sector.”

Those contingent liabilities arose from the agreement of 'take or pay' contracts with energy producers extending until 2023, which were entered as part of the measures taken to address the acute power shortages experienced earlier in the decade.

While the power shortages were indeed alleviated and the consequent shadow over economic activity lifted, this was achieved under a program that incorporated overoptimistic estimates of power demand which have left the government bearing ongoing 'take or pay' costs, it emphasised.

Ghana’s debt stock has increased by about GHS86.6 billion since the Nana Akufo-Addo government came into office three years ago.

Some economists and market watchers have described the rate and quantum of borrowing by the government as alarming and warned that it could plunge the nation into an economic crisis if care is not taken.

In December 2016, Ghana’s debt was GHS122, representing about 62% of GDP. This was based on the old economic value of the country.

However, at the end of September 2019, Ghana’s public debt was about GHS208.6 billion, representing 60.3% of GDP due to the rebasing of the Ghanaian economy.

The IMF has already warned that Ghana has a high risk of becoming a debt-distressed country.

We can achieve our goals with hardwork

Don’t be fooled by prophets, they scan social media for information

Photos: GRA intercepts 550 gallons of oil from Togo to Ghana

African youth positive of future fortunes of the continent

EU satisfied with progress of projects in Ghana

If I’m removed from office, I can go into farming

Akufo-Addo must be quarantined after return from Norway

Burna Boys Reveals He Has Adopted A New Igbo Name » ™

Coronavirus: Ras Mubarak is the one to be quarantined not Akufo-Addo

Dare me and you will regret it

Jesse Tyler Ferguson’s long journey to be a dad

EPL: Liverpool ‘could miss out on title’ if league ends because of coronavirus

Woman Faces Court For Duping 51 Persons In US Visa Deal

Akufo-Addo has failed, kick him out- Mahama tells Ghanaians

Funny Face set to give two cars to loyal fans

Coronavirus: Quarantine Akufo-Addo For 14days When He Returns From Europe Tour – Ras Mubarak

Funny Face replies Sandra Ababio; threatens to spill her secret over her involvement in his beef with Liwin » ™

UK’s Trade Commissioner for Africa to toast Ghana to investors

GJA fumes at Parliament over Speaker’s ruling on media coverage

‘Save the Kids With Camidoh’ comes off Saturday

GETFund Scholarship should not be discriminatory

Kotoko is on course in winning the league

I am not into galamsey