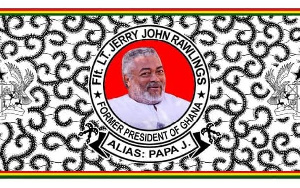 Ghana will miss her departing former president but citizens have some value of Jerry John Rawlings to hold on to – “his unparalleled legacy as a true statesman.”

This is the view of MP, Albert Tettey Nyakotey, who paid tribute to Rawlings via a Twitter post. The Yilo Krobo MP also described the former leader as “father of the fourth republic.”

“Today, we begin the final funeral rites of the man who founded the Great NDC and who is father of the 4th Republic of Ghana, HE JJ Rawlings. The entire country would miss him but we take solace in his unparalleled legacy as a true statesman. May H.E. find rest with his maker,” his post read.

Rawlings’s final funeral rites have started today with a requiem mass at the Holy Spirit Cathedral in Accra. It will be followed by two days of laying in state at the Accra International Conference Center.

Burial is slated for Wednesday, January 27 at the military cemetery. Earlier this week, reports indicated that the Anlo traditional council had requested that he be buried at his hometown.

Rawlings ushered in Ghana’s current constitution and the fourth Republican dispensation. He led the National Democratic Congress, NDC; to win the first two elections between 1992 – 2000. He handed over to the then opposition New patriotic Party, NPP.

Rawlings had a series of post-office controversies under successive presidents. From public clashes with his successor, John Agyekum Kufuor’s personality and his government, to open disagreement with NDC governments led by his former veep, Prof John Evans Atta Mills and John Dramani Mahama.

Roundly, his status as a statesman has been touted by elements within the two major parties even though others have accused him of being overly divisive in his approach to issues.

Today, we begin the final funeral rights of the man who founded the Great NDC and who is father of the 4th Republic of Ghana, HE JJ Rawlings. The entire country would miss him but we take solace in his unparalleled legacy as a true statesman. May H.E. find rest with his maker.???? pic.twitter.com/NWnqzrMils