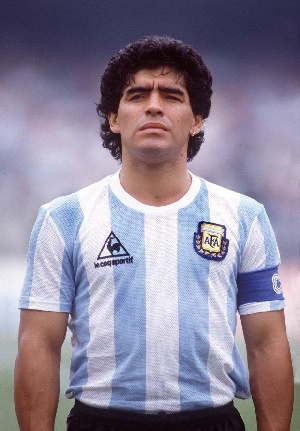 Premier League clubs are being directed to observe a minute of silence to honour football legend Diego Armando Maradona who passed on Wednesday, November 25, 2020. This is a directive from world football governing body, FIFA.

Diego Maradona, who has died aged 60, succumbed to heart failure. Regarded as one of the greatest players in the history of the game, Maradona became a household name after inspiring his country to World Cup glory

‘‘On 25 November, football lost one of its greatest icons, Diego Armando Maradona. Across the world, there is a sense of profound loss at the untimely passing of a true legends of the game. It is not an overstatement to say that football will not be the same without him. We will be forever thankful for the contribution he made to our sport and we will miss him dearly.

‘‘In honour of Diego Armando Maradona and in solidarity with his family, and everyone who loved him so much, the flags at FIFA headquarters are being flown at half mast, and FIFA calls upon all competition managers to hold a minute of silence at every football match this coming weekend or at the next possible occasion’’ a FIFA statement read.

The directive means a minute of silence shall be observed this weekend across Premier League centres.

Solskjaer on van de Beek: I would Not say that he is happy. In his position, there are players who are really good
Lester is Interested in Edouard. Rogers worked with the forward seltice
The minges can come in the start of Barca vs Elche. Desta has a muscle injury
West Ham are ready to extend the contract with Moyes. The club is 7th in the Premier League
Kovac on Golovin's 2 assists: I am very happy with his performance
Benteke could move from Crystal Palace to West Brom
En-Nesiri is the 1st Sevilla player in 81 years to score a hat-trick in 2 consecutive La Liga home games
Source https://www.ghanaweb.com/GhanaHomePage/SportsArchive/Ghanaian-clubs-to-observe-a-minute-silence-to-honour-Diego-Maradona-1120733

85 people arrested for not wearing nose masks in Koforidua

‘You Will Reap The Fruit Of Your Labor’, Actress Adunni Ade Prays For Parents

Bobrisky Vows To Spend “N532Million” On His 30th Birthday

Patapaa’s wife reveals why she agreed to marry him [Video]

Mbappe admits mind not made up on PSG future

Top 5 Places To Visit In Lagos

Made in Ghana bread selling in US stores

Places in Western Region you should consider visiting in 2021

VIDEO: Cecelia Marfo Has A Mental Disorder And Is Depressed In Her Marriage!

Uzodinma Threatens Another Lockdown In Imo, Mandates Use Of Face Masks