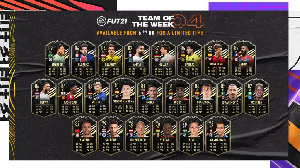 Ghanaian duo Yaw Yeboah and Mohammed Kudus were named among the best performing players for last weekends round of matches in the European leagues by EA Sports.

Ghana midfielder Yaw Yeboah was named in the EA Sports Team of the Week following his outstanding performance for Polish side Wisla in their 6-1 win over Stal Mielec.

The Black Meteors captain scored two goals and registered an assist in that game which was the club first win the ongoing 2020/21 season.

The winger's performance was spotted by the makers of FIFA 21 who put Yeboah on Team of the Week in Ultimate mode.

The Ghanaian International joined the Polish side in the summer transfer window and has established himself as one of the key players in the team.

The former Manchester City player has made five appearances in the league and has scored three goals for his side.

Ghana and Ajax midfielder Mohammed Kudus was also named in the EA Sports Team of the Week.

The 20-year old scored his first goal for Ajax in the Eredivisie against Hereenven in that 5-1 win.

Kudus had assisted Dusan Tadic for the first goal of the game before smashing his effort into the bottom corner.

The former Nordsjaelland star was adjudged man of the match after the game.

Kudus suffered a bad injury in last Wednesday Champions League against Liverpool at the Johann Cryuff Arena and has been ruled out of action until next year.

Mason mount: Chelsea's Goal is to always be No. 1 in all competitions and take trophies
Lewandowski on ending his career at Bayern: I don't know. There are still 2.5 years left on the contract
Bayern prepared a t-shirt with the name of Medvedev: Bayern Munich congratulated Russian tennis player Daniil Medvedev on winning the final ATP tournament
Andrea Pirlo: I feel the same way about Ronaldo as I Do about Work and Portanova. This is me
We study how the players sit in the locker room. Messi in the center, Lukaku wanted Drogba's place, and Roy Keane yelled at the young Pique
President Vasco da Gama: we need Balotelli in terms of fighting racism, not just as a player
Ronaldo, Messi, Lewandowski and Marquinhos nominated for best player at the Globe Soccer Awards
Source https://www.ghanaweb.com/GhanaHomePage/SportsArchive/Ghanaian-duo-named-in-EA-Sports-FIFA-Team-of-the-Week-1091902

UFP declares support for NPP in the 2020 elections

Citizens need to be adequately sensitized on roles of MPs – Archbishop

Sale of alcohol near polling stations is an offence - EC

Konadu Not Withdrawn From 2020 Elections — NDP

If my 1st term was satisfactory, imagine what my 2nd term will be – Akufo-Addo

We See Every Polling Station As A Flashpoint – Superintendent Anyani

A Father To All, He’s Not A SARS Official -Nkechi Blessing Defends MC Oluomo After A Fan Trolled Him

With all these budgetary allocations, what significant case did Amidu prosecute? - Charles Owusu

'We will not tolerate violence on election day' - Bryan Acheampong

I’ll choose you to be my husband over and over – Patience Jonathan tells her hubby, Goodluck

Elephant rescued after falling in 20m deep well in India

Ellembelle: One NDC Supporter Killed, Others Injured After Car Crash

We Have Blueprint For Ghana’s Dev't, I Plead With You To Extend My Mandate– Akufo-Addo

"We'll Not Tolerate Any Violence On Election Day" — Bryan Acheampong

Akufo-Addo Will Always Beat Mahama In Any Contest – Bawumia

I'm Seeking Re-election Based On My Records –Akufo-Addo

'Akufo-Addo is deeply soaked in corruption, vote against him' - Eric Adjei

EC Commended For Making Voters Register Available To The Public

We don't have the power to shut down internet on Dec. 7 - NCA debunks Mahama's claims