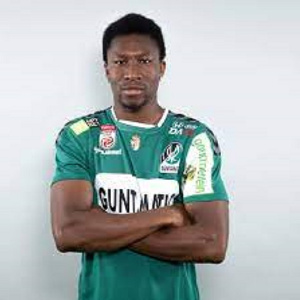 Ghanaian forward Saddam Sulley is yet to know the outcome of his future at Austrian club, SV Ried, despite having a year left on his contract.

The 24-year-old came close to terminating his contract as reported by GHANASoccernet.com a month ago.

The ex-Vision FC played endured a difficult first season with the club, playing only four games.

Meanwhile, the arrival of Serbian forward Nikola Stosic puts his position in the team in doubt.

Sulley is not in the plans of Ried manager Andreas Heraf for next season, Sporting manager Wolfgang Fiala has confirmed.

He could leave should he get a good offer elsewhere.

He who loses fights another day; let’s not be disappointed – Mahama

Saglemi housing project plan was to build 5,000 units at a go; no phasing – ET Mensah

Weather to be cloudy with rainfall possibility

Rawlings left NDC due to 'wickedness' of party officials - Atubiga

Women’s contribution to the film industry has been enormous

Confusion over EPA’s engagement with Newmont and mining communities

Election 2020: He who loses fights another day; let’s not be disappointed – Mahama

Would you’ve survived in Ghana if Nkrumah had governed like you? – Kwame Minkah jabs Akufo-Addo

1992 Constitution is a tool for stealing – Ernesto

Augustine Boakye has too much talent – WAFA Chief George Ofosuhene

‘List of a Lifetime’ with Kelly Hu, Shannen Doherty coming to Lifetime

6 natural tips for boosting your libido

US Court slaps University of Ghana with $165 million judgement debt

Rihanna Is Officially A Billionaire, She’s The First Female Musician To Attain The Status » ™

Avram Ben Moshe Blasts Ken Ofori Atta, Tells Him To Run To The Cathedral When He’s Sick For Treatment » ™

The timing of Ekuban’s transfer was wrong

Richard Boadu wants out of Medeama

We will not be presenting any petition

Estonian swims 18.6 miles with a monofin for Guinness World Record

We will not be presenting any petition - #FixTheCountry demonstrators

Give Ghanaians prosperity – PPP to Government

“The last time you made a funny joke, I had a hairline” – Kwadwo Sheldon mocks DKB » ™

Some 304 persons die from COVID-19 in Ashanti Region