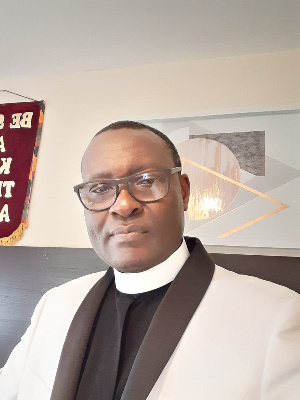 The founder and leader of Victory Outreach Church Worldwide, Apostle Paul Kofi Agyekum has charged Ghanaians to contribute to the cause of the building of the nation by paying realistic taxes.

In a sermon to commemorate the 30th anniversary of the church, the renowned televangelist cautioned the Church members to resist sin which deters the grace of God. Speaking with the theme 'This Far By Grace', the Apostle emphasized, that Holiness in Christ requires the Christian to be bold and be courageous, and goal setting.

He explained in biblical context, citing that grace is the ability to do extremely beyond your capabilities and thus grace requires the Christian to act accordingly and to work around the grace. Hebrews 4:16

"It's therefore, important that we fight against discrimination in government, and also pay our taxes to help push the economical state of the nation. As a Christian, you abide by the rules governing the country and pay your taxes as Jesus did," he said.

He called on the general public to exhibit the Christlike attitude of paying their dividends and taxes to help better the fortunes of the country economical stability.

"Grace requires you to reject evil and be holy, to pay your dividends to the church and the nation," he added.

Apostle Paul Kofi Agyekum, a renowned journalist turned pastor has been a strong critique against Ghana's economical instability and misappropriation of the public purse.

Bayern gave Zirkzee on loan to Anderlecht
Bayern's match in the German Cup was postponed due to quarantine in Bremer
Shakhtar coach De Derbi on 2:1 with Genk: If we want to go further, we must play powerfully for the entire 90 minutes
Lewandowski admits that he will leave Bayern in a year. The striker has a contract until 2023
Kochenkov on moving to Arsenal: Shamov, Levashov are excellent goalkeepers, we will compete
Neville about Kane: He seems to be very annoyed, but this is not an excuse. It is impossible to justify a player missing training
Kovac about hooting at Tchuameni: We are devastated that this is still happening in the XXI century. We won the match against racism

WhatsApp launches ‘View Once’ that deletes photos and videos once seen

Amazon’s ‘Lord of the Rings’ series to premiere on September 2, 2022

Eagle Prophet is the most useless prophet I have ever known

Hajia 4Real Finally Shares Most Embarrassing Moments In Her Life

Dualisation of roads on course

‘Shatta Wale Has The Biggest Hit In Ghana’ -Sarkodie Confesses

We are not in collusion with GHS, KIA testing Centre to scam visitors

Ghacem to invest US$ 100million to build new factory in Kumasi

Let it be peaceful, no derogatory terminologies – Prof Gyampo urges

Tapping into electricity from a neighbour is illegal – ECG

Dualisation of roads on course - Minister

President Lourenco calls for closer cooperation between Ghana and Angola

Unavailability of integrated supply-chain management cause of uncompleted, delayed projects

Bird flu has affected our sales

Your request to remove CJ premature – Presidency to ASEPA

We are not in collusion with GHS, KIA testing Centre to scam visitors - M Plaza

Efficient and judicious land use necessary to beautifying Accra – Minister

We need to protest to save Ghana – Okatakyie urges Ghanaians

If you pitch Kuami Eugene against me, mona mobl3

Akufo-Addo is insensitive to plights of workers – Ayariga jabs

Saglemi Project: Stop the politicization if you don't have a good case - Buaben Asamoa to NDC

#FixTheCountry: we need to protest to save Ghana – Okatakyie urges Ghanaians

“I Don’t Entertain Fake Friends In My Circle”-Sarkodie Says