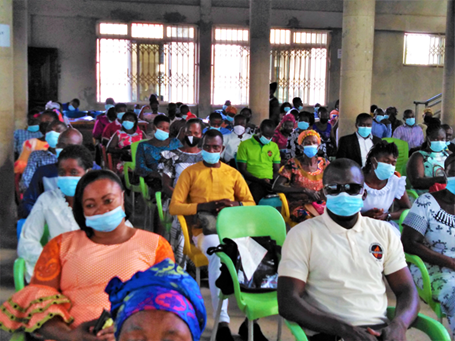 Ghanaians have an inalienable right to demand accountability from their leaders, Mrs Constance Amankwa, Suame Municipal Director of the National Commission for Civic Education (NCCE), has noted.

She said the citizens were entitled to know how state resources were being utilized at every point in time for the common good and interests of the masses.

Mrs Amankwa said transparency on the part of those entrusted with state resources and funds was a sign of good governance and in line with the Directive Principles of State Policy.

Mrs Amankwa was speaking on the theme: “We are One, Ghana First,” at an educational outreach programme at the Maakro SDA Church in the Suame Municipality of the Ashanti Region.

The programme formed part of activities to mark the 2021 Annual Constitution Week, which seeks to create awareness of the 1992 Constitution.

Mrs Amankwa said the constitution remained the fundamental law of the country and as such the citizenry were expected to uphold its provisions.

“We are enjoined to respect the laws of our land to be good citizens,” she advised, saying responsible and quality citizenship was critical to ensuring discipline and promotion of the rule of law in the society.

“Being a good citizen means we have pledged to avoid practices, which consequences can draw us back as a nation,” the Municipal NCCE Director observed.

She asked Ghanaians to embrace good neighbourliness, tolerate divergent views and respect the fundamental human rights of every individual.

Mr Pericles Owusu Antwi, Clerk of the Maakro SDA Church, appealed to the Government to resource the NCCE with the requisite logistics for effective education of the citizenry on their civic responsibilities within the context of Ghana’s development aspirations and agenda.

Overdue book headed back to California library after 70 years

UK borrowing sinks in May on easing lockdown: data |

Ghana, UK reaffirm partnership on climate adaptation and resilience ahead of COP26

AU troops relocate base as part of realignment

6 popular Ghanaian pastors whose controversial comments landed them in trouble

Uefa declines request to light up Allianz Arena in rainbow

Grandpa Keeps Begging To Come And Li.ck Me

Shatta Wale reacts after he was busted for wearing ‘fake’ designer

Kuami Eugene, Adina, Medikal, others to perform at 22nd VGMA on June 25-26

A celebration of late JJ’s birthday

4 essential nutrients for a healthy brain