Give us the legal mandate to chase out galamsey operators - Chief 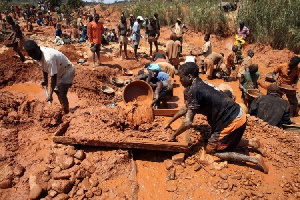 The fight against galamsey is to protect water bodies, vegetation covers and other natural resources

Benkumhene of Twifo Traditional Council, Nana Boakye II has called on the government to give chiefs the legal backing to help fight illegal mining known widely as galamsey in the country.

The fight against galamsey, he opined is to protect water bodies, vegetation covers and other natural resources for sustainable development.

He told the Central Regional Minister, Justina Marigold Assan during a tour to some mining sites in the region, “give us documents and legal backings to exercise our mandate to drive out illegal miners from our lands.”

“We are killing ourselves day by day by the unscrupulous acts by galamseyers since our water is mixed with toxic metal and we drink it daily,” he added.

Nana Boakye II averred that tracking illegal miners as it stands now is pretty difficult because they have documents covering their operations.

He, therefore, advised the government to seek the consent of traditional authorities before granting concessions to mining companies.

Ronaldinho: I can't imagine myself as a coach. I have never really watched football
Barcelona believes that the contract with Messi will be signed before August 8, when the match with Juve for the Gamper Cup will take place
Grealish returned to training with Villa. Man City offered 100 million pounds for him
Giroud on the 9th number in Milan: I'm not superstitious. I don't think that the quality of my game depends on the number
Chiellini will sign a 2-year contract with Juve. In August, he will turn 37
Carragher on Kane: Why sign a 6-year contract? A gentleman's agreement 😂 😂
UAF confirmed that Shevchenko is leaving the national team of Ukraine

With 15 years of experience, I would have been like Celine Dion in the West

I’m the only and legal Mrs Adorye – Empress Gifty

Marriage is warfare for warriors not for jokers

Oswald donates ‘our day’ gift to an orphanage

I have bought 3 cars, land

You’re calling for chaos and lawlessness

MTN FA Cup: ‘The final against Ashantigold won’t be easy’

Hudson-Odoi could be more dangerous on the left

Report of LGBTQ+ recruitment in SHS must be probed

Mahama yet to take ‘firm decision’ to contest – Bawah Mogtari

Widen tax net to include E-commerce businesses - GUTA to government

LBCs assure cocoa farmers of payment after much agitation

Prices of global commodities as of August 2

Tokyo Olympics: I was criticized for including young Samuel Takyi in national team – Black Bombers

BOST dismisses claims of lack of fuel by tanker drivers

Today in History: Ministry of Transport initiates steps to regularize ‘Okada’ use

Anti-LGBTQ+ bill to be laid in parliament Monday

Anti-LGBTQI+ Bill to be laid in Parliament today