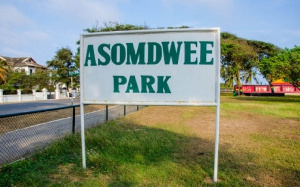 Atta Mills was buried at the Asomdwee Park

Koku Anyidoho in one of his usual rants against the former president accused him of disrespecting the late president, Atta Mills.

The former Deputy General Secretary of the NDC also levelled a number of allegations against the former President and labelled him an ingrate.

He vowed to make some revelations about Mills/Mahama which he believes will reflect badly on Mahama.

“Never again should any idiot claiming to be loyal to John Mahama, ever disrespect the memory of John Evans Atta-Mills, and let them not dare insult me again or else I will give deep information about how John MAHAMA disrespected Atta-Mills.

“I rest my case on John Mahama until further notice. Let him go and kneel before the tombstone of President Atta-Mills and beg for forgiveness.

“I don't have the time to waste on uneducated infidels who don't understand that, their idol, John Mahama, has been deeply ungrateful to the memory of his boss, President Atta-Mills,” he tweeted.

It is unknown the trigger for Anyidoho’s latest attack on John Mahama but for his followers on social media, this would not come as a surprise.

Koku Anyidoho has for the past few months attacked leading figures of the National Democratic Congress.

Asiedu Nketia, Sammy Gyamfi, and Ofosu Ampofo have been victims of his social media ‘tirade’.

Barcelona are looking for a midfielder similar to Busquets. The club will try to exchange some of the current players
Milan can invite Sarri if the team does not qualify for the Champions League
They want to allow 25 thousand people to attend the Champions League final. Chelsea and City fans will receive 4 thousand tickets each
Michael Owen: Mount and Foden will be the best players in the world. Phil can be one of the best in the history of England
Zinedine Zidane: Hazard has to play, he has to get his confidence back. He has to rebuild the old version of himself
Gary Lineker: It was the weakest Real I've ever seen. Chelsea are better by a million miles
Iniesta believes that Barcelona will take La Liga: They are able to win all the remaining matches

Media houses must make good use of social media

#FixTheCountry Demonstration: Police advise against it due to COVID-19 restrictions

Asthma in children is not a spiritual attack

District Hospitals for Volta will be delivered – Regional Minister

Two in court for vandalizing Mercedes ML Vehicle during a fight

‘There seems to be a wind of intolerance blowing’ – Kwaku Azar

I will enhance the welfare of GJA members - Dwumfour

Demonstrate tenacity of purpose in your work - Asantehene urges Minister

Draw for Women’s CAF Competition Qualifiers set for May 10

Brace for tougher times as transport fares set to go up

'Our dream is to win the AFCON' – Gyasi

'Gyan and Appiah were my role models' – Gyasi

My four excavators were burnt by soldiers-Licensed miner

The youth must invest for the future – Industrialist