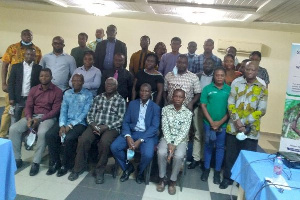 Some participants at the workkshop

Professor Alfred Oteng-Yeboah, an environmentalist, has called on the government to tighten the pesticides’ approval process in Ghana to phase out harmful insect killers in the system.

He also urged the government to also clamp down on the influx of unapproved pesticides on the Ghanaian market.

Prof. Oteng-Yeboah was speaking at a workshop on “Highly Hazardous Pesticide (HHPs) use in Ghana’s Cocoa and Agricultural Landscape: The Way Forward” in Accra.

The workshop seeks to share the findings of a research conducted by Conservation Alliance (CA) under its Sector Partnership Programme (SPP) implemented over the past three years.

The Alliance is implementing a project focused on HHPsuse in Ghana in the Cocoa Sector and Agricultural landscape under the SPP. The SPP is funded by the Ministry of Foreign Affairs of the Kingdom of the Netherlands through Rainforest Alliance.

It also centred on the promotion and adoption of alternatives to HHPs.

He said if Ghana’s cocoa sector was to do very well, then the effects of pesticides use in Cocoa Production, especially on health and the environment, must be seriously looked at.

He said more research must be conducted to establish the effects of pesticides on the health of the environment and the communities as well as the cost to the economic growth in Ghana.

“Alternatives to the use of harmful pesticides in the agriculture production, especially Cocoa production must be vigorously pursued to boost productivity and also safeguard the health of farmers and the environment,” he added.

He expressed the hope that the workshop would bring to light ways to reduce the reliance on pesticides used in the Cocoa Sector and agriculture as a whole to the harmful effects of these pesticides was collectively phase-out.

Mr Raymond Owusu-Achiaw, the Programmes Officer, said with the project coming to an end in December 2020, CA sought to share some insights and findings, and also present on the progress made during this 3-year project.

He said it was to enhance farmers’ access subsidized Cocoa fertilizer, planting materials and pesticides and to promote the safe usage of approved pesticides.

It is also to promote alternatives including the Integrated Pest Management (IPM) to the use of HHPs in Cocoa farming.

On the outcome, the Programmes Officer said it would enhance farmers’ voice on issues affecting them like inputs distribution and IPM adoption.

He informed that it was also to improve relationship with stakeholders including COCOBOD, EPA and Parliament.

"It is to improve awareness on the use of HHPs among Cocoa farmers and the use of alternative IPM.

On the way forward, Mr Owusu-Achiaw said the Alliance sought to forge partnership with the French Facility for Global Environment to scale up the intervention.

He said the conclusions indicated that women cocoa farmers had slight lower knowledge of the use of pesticides in terms of good personal hygiene after pesticides use with the mode of application compared to their male counterparts.

"Women Cocoa farmers use HHPs just because of recommendation," he said.

He said the recently launched Cocoa Management System projects that COCOBOD would give real-time pest and disease hotspots for prompt action at all times.

"COCOBOD will give all spraying teams adequate training and support so they could operate as privatized service provider entities in the communities," he said.

Dr Adu-Acheampong said the future strategy for disease and pest control would be based primarily on good agricultural practices and technologies aimed at avoiding or minimizing the effects of disease and pest.

Griezmann supported the 15-year-old Ukrainian who was beaten in Paris: Power to you, Yuri. Unbearable footage
Lampard on Werner's unforced penalty: I'm upset. He gave a lot to Chelsea, it just went wrong
Napoli scored against Verona in 8.9 seconds. After the start of the match. Only Milan scored faster in Serie A
Werner did not score a penalty for the first time since October 2018. The series of 8 goals in a row was Interrupted
Arsenal will pay Real Madrid 2 million euros for the lease of Edegor. The transition can make Monday
Vladimir Gazzaev will lead Siena from the 4th Italian League instead of ex-striker Milan Gilardino
Ozil has signed a 3.5-year contract with Fenerbahce
Source https://www.ghanaweb.com/GhanaHomePage/business/Government-should-tighten-pesticides-approval-process-Environmentalist-1120340

Rapper Erigga tells men the kind of ladies they should date

Rawlings was an enigma – Palmer-Buckle

Media Schooled On Combat Jiu Jitsu, Grappling And Self Defence

Upgrade your smartwatch with the new HUAWEI WATCH Fit!

Russian policeman fired for posting video in support of Navalny

J. J. Rawlings, The Tribute: The tenderness in his toughness

Asamoah Gyan Goes Haywire, Blast A Fan Who Questioned Him About His Usefulness At Legon Cities (Video+Photo)

I want to own an owl

“I’m The Most Hated Person Yet I’m Genuine”

Why appoint an AG-designate who’s interested in disenfranchisement of 30k citizens? – IMANI quizzes

Me & Neo are in a relationship — BBN Vee confirms (video)

Tacha Garners 1Million Followers On Facebook; Says “It’s A Big Win For Her”

COVID-19: Wearing Face Mask All Day Is Not Easy

Woman who once took to the streets with a cardboard to beg for job, builds herself a house as she turns 31

Why appoint an AG-designate who’s interested in disenfranchisement of 30k citizens? – IMANI

Why appoint an AG-designate who’s interested in disenfranchisement of 30,000 citizens? – IMANI

Berekum Chelsea coach satisfied with draw against Hearts of Oak

Will the AfCFTA work for Ghana? - Analyst asks

Ghana shall never have another Rawlings – NDC MP