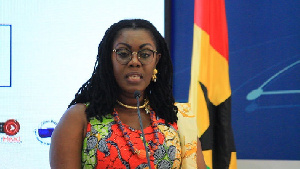 The Government has stated its commitment to improving services rendered by the Ghana Meteorological Agency (GMet).

Mrs Ursula Owusu-Ekuful, Minister of Communications and Digitalisation, said plans were afoot to supply the Agency with modern equipment and position it to function effectively.

The Minister said this in a speech read on her behalf at the opening of a five-day co-production workshop by the GMet, under the auspices of the Ministry, in collaboration with the Kwame Nkrumah University of Science and Technology, and the University of Leeds, United Kingdom.

She underscored the importance of meteorological services in view of the “drastic” effects of climate change across the world.

The Minister said the changes in climate conditions over time, had significantly affected agriculture, food security, and had in most cases led to natural disasters such as floods and droughts.

"It is, therefore, important that scientists and meteorologists working in the climate sector, enhance collaborations with all stakeholders to improve service delivery," Mrs Owusu-Erkuful said.

The Minister noted that with Sub-Saharan Africa, presently seen as one of the most vulnerable regions to the effects of climate variability due to the fragility of its economy, "It has become increasingly important to put in place, proactive measures to mitigate the risks of climate change."

Dr. Michael Tanu, Director General, GMet, said Ghana and other countries on the continent, were currently being affected by climate related disasters such as floods.

This he said needed to be resolved urgently since such disasters adversely affected lives and property.

Dr. Tanu said through the stakeholders meeting to brainstorm and come up with tangible recommendations, the GMet could develop tailor-made solutions towards improving its services and in effect, preventing and minimising the ill effects of weather-related disasters.

Themed, "Evaluation and improvement of zero to six-hour and short term forecasts, (nowcasting and synoptic forecasting) with users for better decision making," the workshop aims at preparing for and ensuring the effective engagement of decision-makers in the development of improved forecasting, as part of the project's third testbed, taking place in September, 2021.

African SWIFT Testbeds are a formal activity, aimed at testing new and prototype tools and methods for forecasting, involving the active collaboration of researchers, forecasters and users.

The Testbeds enable African-SWIFT scientists to work directly with key users, before starting to make forecasts, so that forecasts are co-produced and tailored to meet users' specific information needs.