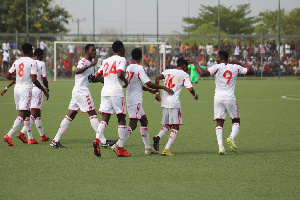 WAFA SC have moved to fifth on the Ghana Premier League standings after posting a narrow 1-0 win over Legon Cities FC on Saturday afternoon.

The Academy Boys in the past month have been on a good run where they have amassed crucial points.

Today, the team in Sogakope hosted their matchday 25 opponent at the Red Bull Arena looking to earn three crucial points to push higher on the league table.

On the back of a very good performance in the first half, WAFA SC led at the break courtesy of an equalizer from in-form attacker Justus Torsutey.

Although Legon Cities FC will come in strong in the second half, the team failed to find the back of the net and hence have been forced to succumb to a 1-0 defeat.

As a result of today’s win, WAFA SC have climbed to fifth on the Ghana Premier League table while Legon Cities FC stays in 15th and one point behind the relegation zone.

#FixTheCountry; There has not been good governance since Nkrumah’s gov’t, focus on yourself