‘He is my constituent, I’m his MP’ – Sam George speaks on relationship with ET Mensah 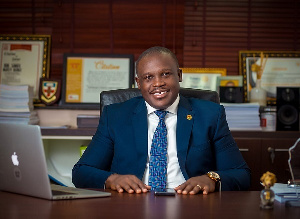 Ningo Prampram Member of Parliament, Sam Nartey George has spoken about his relationship with former MP for the area, Enoch Teye Mensah.

The two are known to have a not too cordial relationship since the sitting MP dethroned E. T. Mensah in the National Democratic Congress, NDC, primaries to contest the seat in the 2016 elections.

Asked about the relationship that exists between them, Sam George answered on two levels. The first is a working relationship by virtue of E. T. Mensah being the Greater Accra Regional Representative on the Council of State and secondly at the level of the constituency.

“But when he comes to the Constituency, he is my constituent and I am his MP… wherever I meet him I always give him (due respect).”

Asked if he enjoyed the explicit support of the former Youth and Sports Minister, he state thus: “he is under no obligation to give me his support, so I will not make any such demands ….the most important thing I need is the support of the majority of my constituents.”

The MP pointed to the fact that his votes in 2020 had appreciated by 98% as compared to figures in 2016, pointing to that as a testament of the support that the people who matter accord to his position as their legislative representative.

Hearts of Oak players have been overused - Laryea Kingston

Today in History: You’re a blessing to NPP and Ghana - Mahama heaps praises on Kufuor

Meet Sumaila Abdallah: The only Ghanaian to win FIFA award

Drama in court in former IGP vs Kweku Annan's case

Mbappe and Messi double up in PSG victory

Walker sent off as Man City crash at RB Leipzig

Xavi calls on struggling Barcelona to 'make history' at Bayern