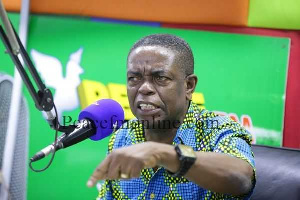 The Managing Editor of the Insight newspaper, Kwesi Pratt Jnr, has explained why he is yet to be impressed by the actions of Greater Accra Regional Minister, Henry Quartey.

Pratt says unlike some Ghanaians who have been wowed by the innovations of the Minister, he still has reservations about the genuineness of his actions.

Pratt’s skepticism about Henry Quartey is premised on what he perceives to be the lack of implementation of those actions in the minister’s constituency.

Pratt stated on Metro TV that while Henry Quartey is enforcing the law in other constituencies, his area which is Ayawaso Central is engulfed with same challenges.

He cited an example of ‘dirty banners’ of Henry Quartey littered in the streets of Alajo to buttress his view.

Kwesi Pratt says until he sees those same changes in Henry Quartey’s backyard he will not join the bandwagon of praises.

“From the very beginning I stated that I’m not one of those enthused by what the Greater Accra Regional Minister is doing. I said I was waiting to see if what he is doing in Adenta, Tudu and those areas would be done in his own constituency which is Ayawaso Central and I have been watching very closely.

“I drive through Alajo a lot and if you drive through, his own torn banners and posters which have become an eyesore are still hanging there. All the electricity wires have his banners which are dirty and nobody is cleaning them. Why is the exercise not being carried with vigour in Ayawaso Central?

“Why is the exercise being carried in Tudu, Adenta, Kpone and other places and not Alajo. If the exercise is good for all, it must happen in every constituency. That for me is a problem,” he said.

Kwesi Pratt also asked the minister and the government to consider some of the concerns raised by the Ranking Member of Parliament’s Transport Committee, Kwame Agbodza.

Agbodza is arguing that Henry Quartey is not clothed with the powers to ban tricycles in Accra.

His claim has been rejected by Henry Quartey but Pratt who supports the move wants more stakeholder engagement on the matter.

2022 budget rejection: NDC’s action may backfire against them in 2024 elections - ACEPA

2022 budget rejection may cause a delay in salary payments, other government spending – Dr Peprah

NPP has lost touch with the people of Ghana – NDC MP

2022 budget: You are tagged 'enemy' if you oppose anything about Akufo-Addo's govt – Ricketts Hagan

No budget, no pay for government workers with dire consequences for economy

Why Ghana is struggling with increased power rationing - Duffuor reveals

Be careful with anti-LGBTQI+ bill – CHRAJ

2022 Budget rejection: Speaker could face ten-year jail term if he acted contrary to the constitution

E-levy problematic, Ghana can generate US$4.3 billion from oil and mining sector – Duffuor

Explainer: Here's what the rejection of 2022 budget and economic policy means for Ghana

2022 Budget rejection – Who said what

Except when there's an emergency, police mgt must stay in traffic - IGP Dampare

This is what the rejection of the 2022 budget means for Ghana, govt

This is what the rejection of the 2022 budget means for Ghana, government

Watch all the goals John Mensah scored for Ghana

Today in History: Adopt electronic payment as a way of life – Dr Bawumia

Today in History: Six out of 10 believe Ghana is headed in the wrong direction - Report

Today in History: Akufo-Addo knows Ofori Atta, Gabby are stealing for him – Mahama

Government is suffocating over payment of trainee allowances – AFFED

Your actions not helping Parliamentary work – Lawyer to Majority leader

New GIPC Board sworn into office