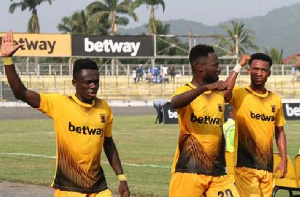 play videoAshantigold S.C won their game after losing 3 consecutive ones

AshantiGold brought an end to their three-game losing streak by clinching a 1-0 victory over Ebusua Dwarfs at the Len Clay Stadium on Sunday afternoon.

The Miners got their goal through Kwadwo Seth Osei in the second half. Before the match, they had only won once in their last five games, losing four.

The two teams created some opportunities to score in the first half but none found the breakthrough in the end. In the second half, the situation was different for the hosts.

Seth Osei got an opportunity just six minutes before the hour mark and made it count with a brilliant finish. His team held on to secure the victory.

AshantiGold is now 10th on the log and Ebusua Dwarfs are 12th.

Watch the full highlights of the game below:

Tottenham sold Alderweireld to Qatar's Al-Duhail. The deal is estimated at 13 million pounds
The sale of Varane is part of Real Madrid's plan to sign Mbappe. The club does not buy players to save money on the PSG forward
Manchester United are ready to sell Lingard, Telles, Jones, Dalot, James, Williams and Pereira. The departure of Martial is possible
Barcelona supported Morib after insults in social networks: We love football and fight against racism
There were photos of the blue away uniform of Real Madrid with orange inserts and a graffiti pattern
Top 30 Fastest Football Players in the world (update)
40 thousand pounds were collected for the restoration of the Rashford mural. The player gave money for food for the needy

Moesha is mad forever – Ibrah One

I Saw Wendy Shay As Patapaa, Blame It On The Al,cohol

Ghanaian rights activist to speak among acclaimed activists at a global conference on SDGs, Agenda 2063

LGBTQ+: People are walking around in pampers with leaking anuses in need of help

ECOWAS Parliament to push for reforms in ICT sector

6 ways your perspective on love changes in your 30s

“I Don’t Know Why My Sister Agreed To Sleep With Dr UN, He’s Ugly”

‘Homosexuality is not a HUMAN RIGHT’

Online petition against LGBTQ+ bill struggles to get signatures

A Plus reveals Akufo-Addo’s ‘biggest weakness’

There is no anti-LGBQI+ bill before Parliament – Oppong Nkrumah

There is no anti-LGBTQ+ bill before Parliament – Oppong Nkrumah

Ghana needs a leader like Kennedy Agyapong – A Plus

Olympics: Tattoos on display in Tokyo despite cultural stigma

Watch: James Bond is back in new ‘No Time to Die’ trailer