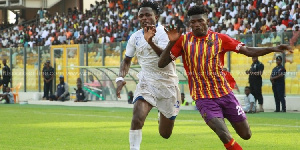 Accra Hearts of Oak secured a vital away point on Saturday to give their Ghana Premier League title boost much impetus.

The Phobians traveled to the Berekum Golden City Park to face Chelsea.

Prior to the game, both sides needed maximum points to satisfy their respective agenda.

The home side needed a win to climb out of the patchy run that had seen them nearer the drop zone.

Hearts on the other hand needed the win to boost their title pursuit.

Hearts coach Kosta Papic made one change to his tatting eleven with Dominic Eshun coming in to replace the suspended Abdul Manaf Umar.

Despite the creation of a few chances in the first half, no goal was scored with both teams entering their dressing rooms at the break unscathed.

Watch the highlights of the game in the post below:

Liverpool are Interested in Coulibaly
Golovin - the best player of Monaco in February according to the fans
Man City is preparing for Zinchenko a contract for 5 years with a salary of 90 thousand pounds a week (Claret&Hugh)
Salah's agent put an end to the tweet after replacing the player in the 62nd minute of the match with Chelsea
Ozil was carried off on a stretcher in the Fenerbahce match. He may miss at least a month due to injury
Bayern do not intend to buy Coulibaly from Napoli this summer
Chelsea want to sign 21-year-old Leipzig defender Konate

Efya, Gyakie, Cina Soul and Others Make It To 3Music Awards Top 30 Women in List » ™

Pastor calls for concerted approach to halt activities of LGBTQ+

Special clinics to be dedicated to pregnant teenagers — Doctor

69 teenage pregnancies recorded in Kpone-Katamanso in 2020

“When You Don’t Have Skeletons In Your Closet You Dnt Fear Dare!!”- Pope Skinny Jabs LGBT Group Who Promised To Expose Him

Some International Artistes Come to Ghana To Push For LGBT Rights, but That Is Not Why I Am Here

Streetbeatz Idolizes Stonebwoy As He Celebrates His Birthday Today

Lady Reveals Why She Wants To Have Two Boyfriends; Netizens Reacts

Ayisha Modi sends heartfelt message to Stonebwoy on his birthday