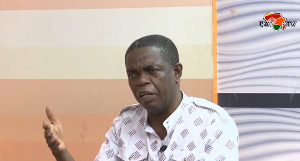 • Kwesi Pratt has criticized the Israeli government, calling it an apartheid government

• He says the Israeli security should not an example for Ghana

Veteran journalist Kwesi Pratt Jnr has given a detailed account of how a businessman who was en route to Ghana was, in his words, kidnapped by Israeli security forces at a place with close proximity to Ghana's Kotoka International Airport.

Kwesi Pratt said on Pan African TV that the businessman was coming to Ghana to undertake a business activity but was apprehended by Israeli officials and taken to a residence in Accra where he was allegedly tortured.

Pratt narrates that the said businessman was ‘smuggled’ out of Ghana on the blindside of the country.

“Two years ago, a businessman who [was] coming into Ghana to carry out a business was kidnapped a few kilometres into the Kotoka International Airport and was taken into [a] private residence and tortured. He was smuggled out of this country by Israeli forces. Is this criminal activity what we want [to] emulate?”

Kwesi Pratt further hit out at the Israeli nation and accused them of committing crimes against humanity.

He said that Ghana must not consider emulating the Israeli security setup as it is targeted at abusing rights and perpetuating apartheid.

Kwesi Pratt was commenting on the security situation in the country which has been triggered by the robbery of a bullion van at Jamestown in Accra.

A police officer and a trader were killed in the robbery. The Ghana Police Service has placed a GH¢20,000 bounty on the killers.

Bayern, Bayer and Borussia Gladbach are Interested in PSG defender Kerer
Ronaldinho: I can't imagine myself as a coach. I have never really watched football
Barcelona believes that the contract with Messi will be signed before August 8, when the match with Juve for the Gamper Cup will take place
Grealish returned to training with Villa. Man City offered 100 million pounds for him
Giroud on the 9th number in Milan: I'm not superstitious. I don't think that the quality of my game depends on the number
Chiellini will sign a 2-year contract with Juve. In August, he will turn 37
Carragher on Kane: Why sign a 6-year contract? A gentleman's agreement 😂 😂

Where are the fertilizers - Minority quizes Government

With 15 years of experience, I would have been like Celine Dion in the West

I’m the only and legal Mrs Adorye – Empress Gifty

Marriage is warfare for warriors not for jokers

Oswald donates ‘our day’ gift to an orphanage

I have bought 3 cars, land

You’re calling for chaos and lawlessness

MTN FA Cup: ‘The final against Ashantigold won’t be easy’

Hudson-Odoi could be more dangerous on the left

Report of LGBTQ+ recruitment in SHS must be probed

Mahama yet to take ‘firm decision’ to contest – Bawah Mogtari

Widen tax net to include E-commerce businesses - GUTA to government

LBCs assure cocoa farmers of payment after much agitation

Prices of global commodities as of August 2

Tokyo Olympics: I was criticized for including young Samuel Takyi in national team – Black Bombers

BOST dismisses claims of lack of fuel by tanker drivers

Today in History: Ministry of Transport initiates steps to regularize ‘Okada’ use