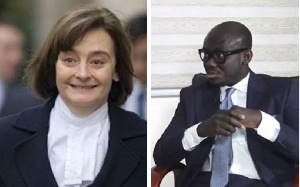 • The firm was to challenge the arbitration ruling

• A day before the ruling, they refused to file the needed response

The Government of Ghana (GoG) in January 2021, had to hire the services of Omnia Strategy LLP, a law firm that belongs to Cherie Blair, the wife of former British Prime Minister, Tony Blair, to file a challenge in an attempt to reverse a $170 million judgement debt awarded against Ghana.

The GoG hired Omnia Strategy LLP because in January 2021, after the Nana Addo Dankwa Akufo-Addo-led government was sworn into office for the second term, the country had no Attorney General (AG) who would be prosecuting a case filed against the country on behalf of the government.

Not until March 5, 2021, that Godfred Yeboah Dame was sworn into office after he had successfully been passed by the Appointments Committee of Parliament.

Speaking to Citi TV in an interview monitor by GhanaWeb, the AG explained, Omnia Strategy LLP coming into the case was an extra step the Government of Ghana wanted to take in order to save the country from losing so much money to an agreement that the country did not benefit from.

So, from January up to my appointment in March 2021, I had no official capacity and that was the period that a law firm headed by Cherie Blair Quincy, Omnia Strategy LLP, represented to the GoG that it could file a challenge.”

He noted that the Akufo-Addo government agreed to hire Omnia Strategy because it is not like other governments in the past that have been described by the Supreme Court as creating, looting and sharing state funds.

“The effort by the GoG in February and March 2021, when I was not the AG, to challenge the award was just an extra step being made by the GoG,” Dame noted.

He continued: “Omnia Strategy LLP indicated in their correspondence that certain grounds could be canvass for an appeal and those were deemed legitimate because those are lawyers [in] established law firm in London headed by Cherie Blair Quincy and all.

“And then a day before, thus March 7, 2021 – which was a day before they filed the challenge on March 8 – they indicated that, upon perusal of the documents, they failed to file the challenge.”

Godfred Dame said further, “if Omnia had assessed the matter as worthy of a challenge, then perhaps we should take a second opinion so we engaged a law firm called Volterra Fietta to also attempt the challenge. The only issue was to get an extension of time within which to bring a challenge; so, the reasons for the extension of time were what the lawyers had to come up with.”

He indicated that the reasons Volterra Fietta gave were, “the late appointment of the AG and COVID-19 as well as government bureaucracy; that is their own judgement.”

The Government of Ghana (GoG) was ordered by a London-based United Nations Commission on International Trade Law tribunal to pay a contractually defined “early termination payment” of more than US$134.3 million plus interest and costs.

The agreement between the government and GPGC, an independent power producer, was terminated in 2018.

According to the London Court, the Government of Ghana failed to apply and set aside the January 26, 2021 decision of the London-based United Nations Commission on International Trade Law (UNCITRAL) Tribunal.

Mr Justice Butcher, in a ruling on Wednesday, June 8, refused to grant the Government of Ghana an extension to apply to set aside the award – adding that the state’s grounds for challenging it were “intrinsically weak”.

The government through its lawyer, Godfred Dame, had attempted to hide behind the 2020 general election and the COVID-19 pandemic as excuses for the delay, but their excuses were dismissed by the London court.

GPGC was represented before the court by Charles Kimmins QC and Mark Tushingham, where Ghana is said to have been too late to challenge the decision against it.

Ghana also had representation from the attorney general’s office and Amofa & Partners in Accra.

The three-member arbitration tribunal chaired by John Beechey, a former President of the International Criminal Court’s Court of Arbitration, and co-chaired by Prof Albert Fiadjoe, a Ghanaian academic, sided with the power producer and awarded almost US$170 million, including interest.

The tribunal also awarded US$614,353.86 against the country as the cost of the tribunal, and a cost of US$3 million against Ghana, being the legal fees expended by the GPGC during the arbitration.

Major highlights of the tribunal’s decision included the fact that the Ahenkora Committee which recommended the termination of the contract did not have sufficient ground in concluding that the GPGC was entitled to only $US 18 million in early termination fees.

The tribunal, in dismissing Ghana’s case, delved into the basis for terminating the contract, stating that the evidence before it indicated that “GPGC did have a building permit for the Blue Ocean Site issued by the Kpone-Katamanso District Assembly on August 15, 2017.”

“GoG [The government] has not been able to adduce any statute or regulation, including the Energy Commission Act, which addresses the requirement for any such additional construction permit,” the Tribunal ruled.

“On the basis of the record as it now stands, it is apparent that even as Dr. Ahenkorah [Energy Commission Executive Secretary at the time] was putting up further hurdles over which he required GPGC to jump in pursuit of its provisional generation licence in November 2017, the Minister of Energy was about to seek the approval of the Ghanaian Parliament of a decision to terminate the EPA along with a number of other PPAs, based upon the Report of the PPA Committee chaired by Dr. Ahenkorah,” it said.

Under British law, the government had 28 days to challenge the tribunal’s decision. However, it went to sleep only to appear in court three days to the expiry of the deadline to ask for an extension.

Omnia Strategy LLP, a British law firm, made the case for an extension and asked for 56 days—twice the allowed grace period.

However, the court set March 8, 2021, for the Government to file processes to challenge the Tribunal’s decision in January. But again, the government took a long nap until April 1, 2021, before filing. This time, another British law firm, Volterra Fietta, had instructions from the government to begin the process.

The law firm, which tagged itself as the only dedicated public international law firm in the world, explained that the new Attorney General, Godfred Yeboah Dame, had only been sworn in on March 5, and the firm received the directive to represent Ghana 10 days later.

But ruling on the matter on June 8, 2021, the court had no sympathies. It said the excuses were unreasonable and “intrinsically weak”.

The presiding judge, Justice Butcher did not hold back.

The judge said the government’s delay was “significant and substantial” as its request for a second extension had come 38 days after the statutory deadline and 27 days after the first extension expired, the Global Arbitration Review (GAR) reported.

He noted that the large sum of money involved in the arbitration was not enough grounds for the appeal to take as long as it did.

“The fact that the Attorney General had not been sworn in until March 5 did not mean the government was unable to act in the meantime, the judge said.

'I will work with all stakeholders' – GBA President elect

Ogyeedom Kwesi Atta’s failed attempts to get CJ, Jones Dotse off his case

Oscar Isaac is my new man-crush

Government to inoculate entire adult population by close of year

Wearing of face mask to be enforced to the letter

Lack of risk management appetite, cause of business collapse

FA Cup: My free-kick goal against Elmina Sharks is my trademark

FA Cup: My free-kick goal against Elmina Sharks is my trademark - Caleb Amankwah

Let your disagreement be based on law, science not emotions – Sam George

How to protect yourself from fraudsters online

Semifinal games to be played at Cape Coast Stadium this weekend

The role of people, culture

Why I handed over medical theatre to Brenase

How to protect yourselves from fraudsters online

Anti-gay bill: Let your disagreement be based on law, science not emotions – Sam George

Anti-LGBTQI+ bill: Let your disagreement be based on law, science not emotions – Sam George

Digitizing the economy: The role of people, culture

Collaborating with young artistes comes naturally to me – Kojo Antwi

#FixTheCountry demo will come off despite upsurge in coronavirus cases – Organisers

Books To Be Launched In Remembrance of Dr Doris Yaa Dartey

Pastor And Wife Found Dead In Their Home At Ayitikope