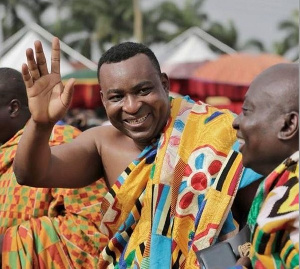 A Deputy Youth Organiser of the National Democratic Congress (NDC), Edem Agbana has declined to speak at this year’s National Students Awards (NSA) ceremony because the Ashanti Regional Chairman of the New Patriotic Party (NPP), Bernard Antwi Boasiako is also billed to speak.

According to Mr Agbana, he is unable to speak on the same platform with Chairman Wontumi who has been described by civil society organization, the Media Foundation for West Africa, as one of the most abusive politicians in the country, adding that Chairman Wontumi has been identified as sexist.

“The individual in question over the past years has been the most flagged public speaker identified as a threat to gender progress, political decency among other reasons which I do not consider fit for purpose both as a matter of personal principle and in a capacity as a role model who should be spotlighted for young people desirous of pursuing politics to emulate," he said.

Agbana noted that having Chairman Wontumi speak on such platforms will be a wrong example for the youth.

“As the fourth estate of the realm, the media has taken up the gatekeeping role and moral curator to exclude the gentleman from very sensitive and culture-centered shows which may endanger decent political engagements," he said.

"Many Civil Society Organizations have called him out and condemned the sexist comments he has meted out to many top female personalities and role models including the first female Running Mate on the ticket of a major political party in Ghana, the venerable Professor Naana Jane Opoku Agyeman, the first female Electoral Commissioner, Mrs Charlotte Osei amongst other instances of unsavoury, vituperative, intemperate and incendiary language he continues to employ in his line of politicking,” Agbana wrote in a letter addressed to the Chairman of the NSA Awards 2020 and copied all media houses.

By empaneling such a flagged personality, I find that your platform will become one of those emboldening opportunities for such deviants to continue to serve bad examples for our teeming youths,” he noted.

The National Students Awards is organized yearly to award deserving students who have excelled in various fields of endeavor.

Holand continues to insist that he is a monster. Fastest in the history of the Champions League scored 15 goals (and added 16)
Koeman on the victory over Dynamo Kyiv: We achieved our goal-we reached the playoffs
Solskjaer on 4:1 with Istanbul: Manchester United played intensely, enjoyed the match. We want to be 1st in the group
Forward Ferencvaros Troll Cristiano: celebrated a goal in his style. Ronaldo responded with a goal and a very angry look
Morata scored 5 goals in 4 games in the Champions League for Juve. His best result is 5 in 12 games in the 2014-15 season
Holand has scored 15 goals in the Champions League the fastest. 7 games better than the record
Ludicrous omission of the Champions League match: the Brugge forward did not want to transfer to the bus, and he was kicked out
Source https://www.ghanaweb.com/GhanaHomePage/NewsArchive/I-can-t-speak-on-the-same-stage-with-abusive-sexist-Wontumi-NDC-Deputy-Youth-Organiser-1092004

Institutions, individuals are welcome to contribute in memory of former President Rawlings

Comedian Basketmouth Talks About His New Album; Opens Up On Why He Initially Switched From Music To Comedy

You Will Always Be My Sweet Ex

Pataapa And Girlfriend Reunite As They Plan To Get Married » ™

Tiwa Savage, Burna Boy, Others Nominated For The ‘Best African Act’ At The 2020 MOBO Awards

I Will Gladly Endorse Any Political Party That Pays Me Well

Ayisha Modi’s Statements Are Not My Official Statements

Amidu sat on evidence that exonerated me – Ayariga

BBNaija’s Tochi Slams Those Saying Celebrities Should Not Repeat Outfits

Girls are wahala, they are chasing me – Ik Ogbonna’s son laments

Cecilia Marfo reveals how men spend lavishly on her

Mahama has not changed, he still has nothing to offer - Akufo-Addo

'John Mahama hasn’t changed, he still has nothing to offer' – Akufo-Addo

Give me victory in December – Akufo-Addo appeals to Ghanaians

Stock Market starts week on the upside due to GCB

Children Sent Me Voice Notes Asking Me Not To End My L!fe

Stonebwoy reveals the actual role of Ayisha Modi in his camp » ™

‘Sarkodie And Stonebwoy Must Come To Shatta Wale And Learn How To Upgrade Their ’ – Former British High Commissioner To Ghana, Mr. Jon Benjamin

South African Comedian, Trevor Noah To Be The Host Of The 2021 Grammy Awards

Check out full list of winners at 2020 Ghana DJ Awards

MI Abaga, Vic O Challenge Each Other To Rap Battle

Zanetor Rawlings shares emotional photo of herself and her father

Ayisha Modi Is Not My Spokesperson – Stonebwoy