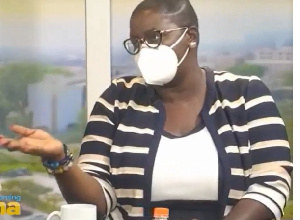 Sharing her experience at the Kasoa Police Station on a case she had with a land guard, Ama Daaku stated that the officers were compromised with biscuits and canned drinks.

According to her, a popular land guard in the area brought down her building and after making reports to the Kasoa Police, they failed to deal with the issue.

She disclosed that Kasoa has earned a bad reputation due to the inability of the police to deal with criminal activities.

“Kasoa has an enviable description of developing land guards in Ghana, we did it and we are to be blamed for that,” Ama Daaku said as monitored by Ghanaweb.

She stated, “My father was interested in real estate and he bought lots of lands, including buying some for us and registering it. I'm still litigating over my registered land that my parents gave to me some years ago.

The NPP Bono East Loyal Ladies captain narrated that her building was brought down on three occasions and when she made complaints to the police, they failed to convict the culprit.

Ama Daaku noted that she has also engaged the services of some land guards to safeguard her property since the police have been sluggish in finding a solution to the matter.

“I have put up my building three times and it has been brought down three times by land guards,” she added.

She went on to say, “I will say it confidently, I don’t have any iota of trust in the Kasoa Police. My experience with them in the last 22-years hasn’t been pleasant in any way.”

“The first time my building was brought down, we got to the station, this gentleman bought canned drinks in a whole polythene bag plus digestive biscuits and shared it with the police. This is not hearsay, I was there, Ama Daaku said on Metro TV.

She added, “We had had an argument and got to the police station and he got them drinks and they took it. My father said let's go and that was how my building got down. From 2013 till now it's uncompleted sitting down there, I have not gone to build it.”

Use Chlorhexidine in Umbilical Cord care of new-borns – GHS

Victims of May 9 stadium disaster call on Akufo-Addo