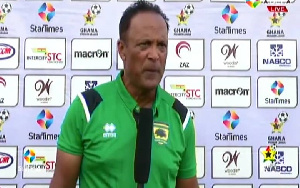 Asante Kotoko head coach, Mariano Barreto has raised concerns about referee Jacob Aduntera’s decision to award a penalty to his team in their game against Karela United in their match-day 30 game at the Len Clay Stadium on Wednesday.

Kotoko defeated their opponents at their adopted home by 2-1 after their first goal from Evans Adomako was ruled offside.

However, minutes later, Captain Emmanuel Gyamfi scored the opener in the 23rd minute. But the visitors responded with an equalizer in the second half after Richard Berko scored a goal which the Porcupines contended to be offside.

But the Porcupines were later gifted a penalty by referee Aduntera after Evans Adomako went down softly when he clashed with Karela’s goalkeeper.

Brazilian midfielder, Fabio Gama, scored from the spot to ensure Kotoko earned the maximum three points to go top of the table with Hearts of Oak having a game in hand.

But speaking after the game, Mariano Barreto expressed his frustrations about the referee’s decisions.

He said, “We scored 2 goals but I don’t know why one is not valid, I have information that it’s a clear goal. So 2 goals came to 1-0 but [in the] second half, I had many doubts about the goal of Karela, even I have doubts about the penalty. I should be clear about this.

“But I think we have to accept the results because we are the clear winners because we’re the best team in the match…” Barreto said after the game.

Koeman about Depay's 1st goal for Barca in a friendly match: Memphis played well, he is important for us
Julian Nagelsmann: Other clubs not from Germany have more money for transfers than Bayern
Kane believes that Tottenham will sell him in the summer to earn funds for investing in the team
Pavel Nedved: Ronaldo will stay at Juventus. Dybala's agent will be in Turin next week
Wijnaldum about Liverpool fans: Sometimes I felt that I was not appreciated and loved enough
Nagelsmann, pig, get lost in Munich-1860. About 20 fans insulted the coach of Bayern
Mateus Fernandes: I dreamed of playing for Barca, but they did not treat me as a professional player there

China announces sanctions against Wilbur Ross, six others in U.S.

Negligence a major contributor to accidents on Accra-Tema Motorway- MTTD

Video: “Delay Will Tell You She’s On Slimming Course Because She Will Buy For You To Eat”

Afia Schwarzenegger Lied, She Didn’t Give Birth To Her Twin In South Africa

All you need to know about Nigerian music sensation Orie King

India monsoon: Rescue operations ramp up in search for survivors

Watch: Blackpink share teaser for Japanese version of ‘The Album’

Wonder women to look out for at Tokyo Olympics

We are ready to play in Africa

Government urged to focus on TVET to address unemployment

Kevin Prince Boateng is a role model for every player

‘Endeavor to fight against complacency’