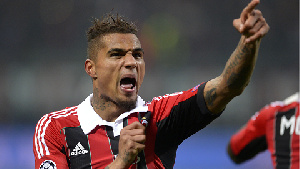 Boateng became an instant hit at the club scoring a hattrick on his debut against Lecce.

However, due to racism-related issues, the former Borussia Dortmund returned to Germany to play for Schalke 04.

"The teammates with whom I found myself best? The best moments of my career concern Milan, we won cups and we all became friends," he told DAZN.

"Looking back I was wrong to leave, Galliani is still angry (laughs)," he added.

His hat-trick against Lecce was the fastest in Serie A since David Trezeguet scored a ten-minute hat-trick for Juventus in 2001.

However, in December 2015 Boateng re-joined Milan on 5 January 2016 on a free transfer and signed a six-month contract.

Boateng made a total of 115 appearances for the club scoring 19 goals.

Villa defender Mings on Man City's 1st goal: I've never heard of such a rule. Nonsense
Pogba on 2:1 with Fulham: I will always be happy with victories and exits on the field
Some Real Madrid players said that Zidane has not spoken to them for 2-3 months. Marca journalist after the relegation of Madrid from the Cup
Perez visited the Juve base and spoke with Ronaldo (Marca)
Lampard will be sacked if Chelsea's results don't get better soon. Allegri and Tuchel are Interested (Sky Sports)
Cristiano Ronaldo: I am very happy with my fourth title in Italy. This is the Juventus we love! 🏆
Zidane has no intention of resigning, Real Madrid will make a decision after the season (Marca)
Source https://www.ghanaweb.com/GhanaHomePage/SportsArchive/I-regret-leaving-AC-Milan-Kevin-Prince-Boateng-admits-1120712

Kanye West ‘less than thrilled’ by divorce getting screen time

No Registration, No Clearance At Ports- FDA Warns

I campaigned for NPP out of frustration – Waakye

Church Leaders advised to pray for their helpers

Police Inspector who went missing found but unable to speak

Chairman Wontumi gives details on how he earned his name

5 in remand, Odikro of Adubinso Biaa on the run over lynching

US President Biden arrives at White House protected by thousands of troops, barricades

I invested money for renovation, it’s my time to ‘recoup’ – Defeated Assemblyman fights

Missing MTTD Inspector found but unable to speak; taken to Adutwumwaa for treatment

The handwarming story of how Bernie Sanders got his inauguration mittens

Election Petition: Detailed account of what transpired in court on Day 22

UK coronavirus variant detected in at least 60 countries – WHO

Introduction of coronavirus vaccines will be based on effectiveness, availability

Police arrest 105 persons in Tema for not wearing face mask

105 people arrested in Tema for not wearing nose mask [Photos]

Woman gives birth for her stepson after dumping his Dad

Joe Biden sworn in as 46th President of the United States

Supreme Court departs from its decision in 2013 election petition

Parliament stands down motion to suspend payment of university fees

Coronavirus: Government has started paying out our insurance packages – GRNMA

Kotoko calls off the bluff of Dwarfs

Hearts of Oak intensify training ahead of Berekum Chelsea showdown

Jean, A Contestant Of Date Rush Is Alleged To Have Mental Illness