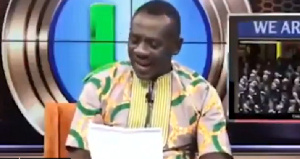 Akrobeto’s growing popularity witnessed another rise on Friday after he interviewed Gad Messika, a French journalist.

Akrobeto on his ‘Real News’ show decided to speak French instead of English and as usual, it was a rib-cracking experience.

Introducing himself to the journalist, Akrobeto disclosed that he is a Kotoko fan and that Felix Annan is his favourite player.

“My name is Akwasi Boadi and I come from Akyem-Oda Ayirebi. The food I like best is fufu and palm soup. I support Kotoko and Felix Annan is my favourite player”, he said on his show.

An excited Messika promised to visit Ghana to share some time with Akrobeto. Akrobeto also promised a return trip.

Akrobeto will be praying that his beloved Asante Kotoko will kick off their CAF Champions League campaign with a victory against Mauritanian side FC Nouadhibou.

The game will be without Akrobeto’s favourite player Felix Annan but coach Maxwell Konadu is confident his side will return to Ghana with some valuable.

Konadu says despite the game being an away match, Kotoko will not be defensive in their approach.

“Technically we say the best way to attack is to possess. We won’t play a defensive game, but if the score-line goes in our favor in the early exchanges, that will also tell you how to operate,” Konadu said in an interview at the team’s hotel.

“Usually, I want to play a game that I won’t concede. But most of the time, you can defend well throughout and concede a last-minute goal."

“I love playing attacking football, whether I am home or away. But if you visit an opponent’s home grounds, you need to be tactful about the way you attack."

“I am not here to play a defensive game. Mark my words. We didn’t come here to defend. We will play and play and play until we get what we want out of this match,” he concluded.

Zlatan is the last person I consider a racist. He loves me too much. Pogba on Ibrahimovic's clash with Lukaku
UEFA will make a final decision on the Euro 2020 format in April, not March
Rojo will move from Manchester United to Boca Juniors next week
Pogba on the reasons for the changes at Manchester United: No one cheats the team - does not run less or does not work out in defense
Aubameyang missed the games because of his mother's illness. She's better now
Musacchio moved to Lazio from Milan
Lampard did a great job in the first year. But his dismissal is logical: Chelsea regressed after the summer purchase, and Frank lost control
Source https://www.ghanaweb.com/GhanaHomePage/SportsArchive/I-support-Kotoko-Felix-Annan-is-my-favourite-player-Akrobeto-tells-French-journalist-1120826

Ned Nwoko Open Up On Secret Of Attracting Young Girls

Member of GFA’s Division One League Board dead

Legacies and ideologies of Rawlings must be upheld – Citizens

Rawlings was a just, selfless and a charismatic leader – Oguaa residents

Food and Drugs Authority to be more accountable in 2021

FDA to be more accountable in 2021

“Which Location In Nigeria Can Be Used To Name A Child?”

Anlo Traditional Area to organise another funeral for Rawlings

Rawlings’ ‘place of honour’ becomes ‘photo booth’ for some Ghanaians

After The Ghana Tourism Authority Cancelled His Movie “Freedom And Justice”, Kobi Rana Is Set To Release Another Film On Valentines Day – See Why

How 'big' hospitals in Accra turned away a dying patient over shortage of hospital beds, fumigation exercise

Rawlings’ daughter breaks down in tears while reading tribute [Video]

Why Konadu didn’t elope with Rawlings to get married

Show respect to your seniors – Sammy Gyamfi to Frank Davies

Tension between Rawlings and I ceased in 2012 – Akufo-Addo