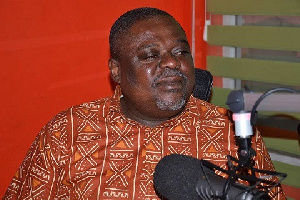 Former Deputy General Secretary of the opposition NDC party, Koku Anyidoho has recalled how members of his party verbally attacked him because of his popular 'comfortable lead' comment.

The "comfortable lead" phrase became popular during the 2016 election; when the opposition party had insisted that electoral figures available had put them ahead.

“We are in a comfortable lead,” Koku Anyidoho said at a press conference in 2016.

However, this popular phrase made him unpopular in the party according to him.

Listen to him as he poured his heart out in an interaction on Neat FM:

Ole Gunnar Solskjaer: Manchester United are waiting for three important weeks, matches with Chelsea, Leicester. We are confident in ourselves
Gattuso on Granada: If Napoli were killing time like this, we would have been smeared in the press
Dzeko is Roma's top scorer in European competitions. He scored the 29th goal and beat Totti
Mikel Arteta: We got to give them two goals. Would hate to fly out of the Europa League
Milan kicked 18 penalties for the season. This is the best result in the top 5 leagues in Europe
Man City can offer Borussia more than 100 million pounds for Holand and Reina. The club is exploring this possibility (90min)
Ajax have won 11 matches in a row. The last defeat against Atalanta in December
Source https://www.ghanaweb.com/GhanaHomePage/politics/I-was-insulted-by-NDC-members-over-comfortable-lead-comment-Koku-Anyidoho-recalls-1162333

Ama K Abrebrese Reacts To The Legalization Of The LGBT Community In Ghana, Asks For More Understanding Of Their Plight

Freda Prempeh: We need a real budget for housing

FG To Present Supplementary Budget For COVID-19 Vaccines In March

We need a real budget for housing

Here is the life span after vaccination

Video: No one shall stand against you – Diana Asamoah endorses Alan for 2024?

Mustapha Ussif promises to be Minister for all

The people giving the Covid-19 vaccine shots are seeing hope, and it’s contagious

Woman arrested for having s3x with 13-year-old boy

No Support From FG On Rescue Of Kagara Students: Gov Bello

Lawyer Amenuvor reveals why he came court to support Ayine

“I Talk Anyhow Because I Lack Mother Care” – James Brown

Bridget Otoo defends LGBT group, 'If supporting homosexuals is the easiest way to hell, I’ll support them and meet Satan'

Coronavirus: Funfair around vaccine arrival was for transparency – Economist

Factcheck: U.S NOT giving out free visas to LGBTQ+ members in Ghana

It's not enough to oust Prof. Frimpong Boateng, he must account for missing excavators – Small Scale miners

We want our shops back – Abinkyi Market traders tell KMA