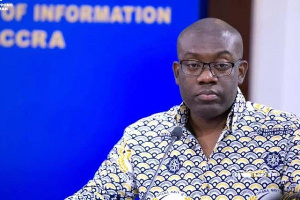 Kojo Oppong-Nkrumah, the Minister of Information, has urged the media to dedicate attention to promote local communities and the investment opportunities there to attract investors.

“There are many communities with a lot of potentials, but unfortunately the media are not doing enough in promoting our local communities and the economic opportunities in order to attract the kind of investment needed to these communities,” he alleged.

Mr Oppong-Nkrumah made the call when he met Journalists and media practitioners in Wa at the weekend as part of his working visit to the northern part of the country.

On the COVID-19 pandemic, the Minister noted that the disease was real and appealed to the media to continue to remind the people not to abandon the safety protocols but continue to observe them to help curb the spread.

"The virus had a severe effect on the national and global economies and highlighted the need for all to take collective responsibility in contributing to the solution to get the economy back on track,” he said.

On the vaccines, Mr Oppong-Nkrumah said the cost was quite high, hence the introduction of the COVID-19 levy to rake in a bit of revenue to take care of those expenses.

“If we don’t help to get the people of the Upper West Region to understand that we are not in normal times and why each person have to contribute a bit to the national kitty so that we can overcome the challenges of our time, then we will not be playing our role well as the fourth estate of the realm,” he said.

Mr Oppong-Nkrumah, therefore, urged the media to keep the message on the pandemic and its impact alive whilst government worked to increase its revenue to deal with some of the challenges.

“The extraordinary times we find ourselves calls for extraordinary measures on all our parts including government, the media and the general populace,” he emphasized.

Touching on press freedom, the Information Minister noted that successive governments have been embarking on measures that are aimed at deepening the freedom and independence of the media in the country.

He cited the repeal of the Criminal Libel Law, the passage of the RTI Bill into law, and the recent opening of the Centre for the Coordinated Mechanisms of the Safety of Journalists and said they were all aimed at deepening the culture of thought and free expression.

Mr Oppong-Nkrumah was in the Region to visit the premises of the state-owned media to have a first-hand view and to find out what their programmes were and how government could be of support.

It was also to engage with the media to deepen the relationship between the media and his Ministry and to share with them a few of the things that the government had been doing as well as respond to questions from the media.

Your service to God won’t be in vain — Bishop

Coronavirus: How Ghana was able to stave off a third wave – Dr Okoe-Boye