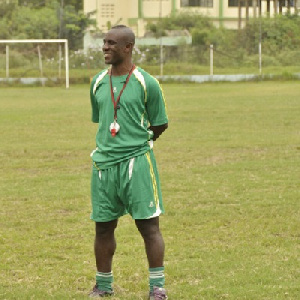 Ghana Premier League side, Inter Allies, have appointed Felix Aboagye as assistant coach of the club until the end of the current season, with an option to extend his stay for a further season.

The 45-year-old former assistant of Yaw Acheampong at Elmina Sharks was sacked together with his boss six days ago by the Fearsome Sharks.

The Capelli club in a statement on their official website said they are excited to have him at the club because he comes with experience.

“We are extremely excited to announce that former Ghana international Felix Aboagye has joined our Technical Team as Assistant Coach of the first team,” the club said.

“He will assist Head Coach Danijel Mujkanovic until the end of the current season with an option for a further season.

“Taking over this role isn’t new as he spent the last few years as Assistant Coach to former Allies Head coach Yaw Acheampong at Elmina Sharks.”

Felix Aboagye is former Ghanaian International striker who played at the highest level, including playing for Al Ahly and Zamalek.

He was a member of the Ghana Olympic Team at the 1996 Summer Olympics in Atlanta.

He played 26 times for the Ghana Senior National Team and bagged 10 goals.

He represented Ghana in two Africa Cup of Nations tournaments–the 1996 and 1998 editions in South Africa and Burkina Faso, respectively.

Michel Salgado: Ronaldo is the greatest player. This fat guy was better than Messi and Ronaldinho
Neymar on Bayern's possession: You can flirt with a girl all night, but another guy will come and conquer her in five minutes
Tuchel insulted the coach of Porto Conceicau after the Champions League match
The main myth about Holand's father: Roy Keane ended his career by flying into his knee. This is not true, although many things have come together
Juve decided to sell Rabiot and Ramsey. The club wants to sign Chalhanoglu and Locatelli
Neymar on the celebration before Kimmich: I didn't try to provoke him. It's fate. He said that Bayern are already in the semifinals
Neymar, Mbappe and Paredes are PSG's most important players against Bayern Munich. Pochettino took into account the mistakes of the first match

No amount of pressure will force me to marry

After berating Mahama for dumsor, I thought you would be better

Under no circumstance must we beat referees

Under no circumstance must we beat referees - Kurt Okraku

Why I Paused Music For Acting – Bisola Aiyeola

Afia Schwarzenegger Narrates How Two Knife-Wielding Guys Wanted To Rob Her On The GIMPA Road, Reveals What She Did

'The Coaches’ webinar to be held on Friday

I can snatch Raymond from Cecilia one time – Sandra

11 killed in another accident on the Buipe-Tamale highway

Galamsey fight: My integrity is at stake – Lands Minister

These are all the Big Tech companies in Africa

UCL: Chelsea squeeze through to semi-finals after late Porto scare