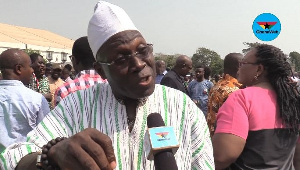 Former Minister of Lands and Natural Resources, Alhaji Inusah Fuseini has said the idea of jailing some Ghanaian illegal miners while foreigners engaged in similar operations are left off the hook is unfair and must be stopped.

John Mahama while making reference to Aisha Huan, an illegal mining kingpin, in an interaction with chiefs and people of Mpohor Constituency in Western Region, October 22, 2020, made a solemn promise to free all jailed illegal miners.

He said “Today, they are still in prison. That Chinese galamsey queen was arrested but left to go free. She was never prosecuted but our people are in jail suffering. When we come, we shall grant all those arrested and jailed some amnesty…It’s sad. The government said it was fighting galamsey, and they arrested, prosecuted, and jailed Ghanaians who were engaged in that activity but left the Chinese woman.

But his statement has received major backlash from a member of the ruling New Patriotic Party (NPP).

Speaking on the constitutionality of the former president’s promise, Alhaji Inusah Fuseini said it is within the president’s power to pardon persons who go contrary to the provisions of the law.

However, he was quick to add that John Mahama and his future government will put measures in place to adequately regulate small-scale mining to benefit the Ghanaian people and not foreigners.

“It is within the prerogative powers of the president to forgive persons who have been incarcerated for breaking the law. These people should know that there is somebody who cares for them. This is not to spite the NPP, the problem we have with small scale mining is how to regulate it for the benefit of Ghanaians. We have come to the conclusion that we cannot continue to prohibit Ghanaians from doing so,” Alhaji Fuseini argued.

Schalke terminated the contract with Ibisevic and suspended Bentaleb and Harit
Bielsa, flick, Klopp, Lopetegui and Zidane are the contenders for the best coach of the year award
Messi, Ronaldo, Lewandowski, Ramos, de Bruyne and 4 Liverpool players are among the contenders for the best
Zlatan about getting the Swedish Golden ball: I Plan to win it in 50 years
Anton Ferdinand was racially abused in comments to a post about a documentary about racism and Terry
Zlatan is named player of the year in Sweden for the 12th time
Ronaldo scored the 70th goal in home matches of the Champions League, repeating the record of Messi
Source https://www.ghanaweb.com/GhanaHomePage/NewsArchive/It-s-unjust-to-jail-Ghanaian-illegal-miners-and-leave-foreigners-Inusah-Fuseini-1092049

We don’t want an ‘Akonfem’ govt to return - Kwakye Darfour

“She would have been my spec even when I was 10” – Banky W says as he shares photos of his wife, Adesua, as a girl

Still Leading As Number ONE In Africa, You Can’t Take My Throne -Bobrisky Slams Upcoming Cross-dressers

Demand for international flights picking up after coronavirus setback - Report

“If a woman loves you, she treats you like her son” – Dzifa Sweetness » ™

Mahama grateful to Bongo for the unflinching support

Don Jazzy To Celebrate His 38th Birthday With 20 Fans

No country has industrialised without nuclear energy - Energy experts

Persons with disabilities deplore lack of access to public buildings

NMC urges media to be sincere and factual

Davido celebrates his mum on her posthumous birthday

Stop lying, you’ve got nothing to offer – Akufo-Addo to Mahama

NPP's manifesto is heavy on track record of achievements - Hadzide

Sacked Headmaster of Tempane SHS will be reinstated – Mahama promises

IPDC urges Journalists to be circumspect in their reportage

Institutions, individuals invited to contribute to memory of JJ Rawlings

I’II support Nana Akufo-Addo if Ghanaians fail to give me the nod - Dr. Henry Lartey

You have become a democratic dictator – Mahama tells Akufo-Addo

Kotoko goalie Annan out for 4 weeks

‘Do Not Turn Your Mentor To Your Com wepetitor’, Helen Paul Advises

We will complete all inherited projects – Osei Mensah

EC spells out code of conduct for observers