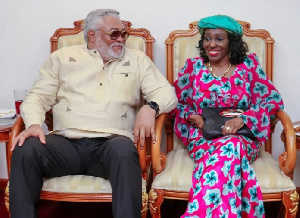 Former first lady, Konadu Agyeman-Rawlings has paid a glowing tribute to her late husband, Jerry John Rawlings, as he is laid to rest Wednesday.

In a tribute read on her behalf by her daughter Amina Rawlings, she said she is convinced it was not by sheer coincidence that she met Rawlings but that they were meant to be.

Opening the tribute with a beautiful poem, Konadu eulogized her husband describing how supportive he has been to her as a wife, mother and throughout her endeavors to empower women in Ghana and also help underprivileged communities.

She said they have worked together as a team to better the lot of Ghana and that for her was something destined to happen.

She recounted how far they have come in life and how they influenced and supported each other through thick and thin.

“Jerry, I know God created us for each other and today we make a formidable team, notwithstanding the ups and downs of life. We believe in each other and in our dream of making Ghana a country we could all be proud of”, she said.

“To me, you were and will always be Jerry, my love, my life partner, my friend, you worked for Ghana… I say farewell”, she reiterated.

While reading the tribute, Amina could not hold back her tears, he broke down momentarily, put herself together and continued.

There are only 6 coaches in the world with a positive balance against Pep. The leader of the rating-Sulscher
Ancelotti on 0:2 with Chelsea: Everton are not at their level. They were better and deserved to win
Lazio women's coach about Italy: Our society is homophobic and racist
Lingard has scored 4 goals in 6 Premier League appearances for West Ham. In Manchester United, he scored 4 goals in the previous 38 matches
Thomas Tuchel: It's a pleasure to work with Chelsea. The skill of the players and the level of the club is obvious
Chelsea have not conceded in 5 home games under Tuchel. This is a record of the Premier League
Leonardo Bonucci: We are waiting for Porto to come to play, not to defend

The dwarfs in my family are still following me – Pamela Watara

Caleb Ekuban features for Trabzonspor during 3-1 defeat to Alanyaspor

KGL to release funds to NLA for payments of wins –

Aside fighting officials fighting corruption, tell me what Akufo-Addo has done better than Mahama? — A Plus

How her father as the first ‘feminist’ influenced her life

Women entrepreneurs advised to be consistent with products

PDP Has Confidence, Zeal To Save Nigeria, Says Wike

Late Mills would be proud of your tribute to J.J Rawlings - Koku Anyidoho to Cadman

Some influential Ghanaian women in sports

NDC must move on after Supreme Court Verdict

Satellites team of 2009 better than this one – Agyemang Badu

Samklef Apologizes After Being Called Out

I wasn’t in Ghana to support LGBTQ+

Focus on strong collaborations among yourselves - Pres to ministers

Scores Arrested In Anambra For Holding Gay Party In Hotel

Samklef Blasts Simi For Calling Him Out Publicly

We need national dialogue on the family - Emerita Prof Ardayfio-Schandorf

Read The Lovely Post Serwaa Amihere Made To Celebrate Her Birthday

#WomensDay: The world has recognized women are active and strong part of football - FIFA Gen. Secretary

Covid-19 vaccination: Things you must know before, after taking your jab

IWD: Our survival depends on an empowered woman – Mahama

NDC must move on after Supreme Court Verdict – Moshake